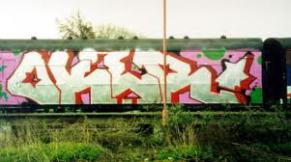 Oker an underground folk hero and inspiration to thousands of young graffiti artists globally was locked up last month for two years for doing what he loves, spraying unique pieces of his work in unique places. Oker is an artist who brought his own twist of New York bombing style to London in a massive way, he and his crew the GSD were well known and respected throughout the 2000’s.

Oker has collaborated on legal train-station pieces with Ser from the Graffitti Kings amongst others and with international gallery artists, his signature style of turning an O into a face on large pieces is well respected. At Trap-ped we consider Graffiti an art-form as it expresses the artists emotions, feelings and hidden intentions for the world to see so we were saddened to hear that such a big sentence had been given to Oker .

There is an event at the pure evil gallery coming up where graffiti pieces that have been donated by other graffiti artists are on show take a look.

What are your thoughts on Graffiti? leave a comment.

JUICE PAK AIR THE CASE THAT CHARGES UR iPHONE...

JUICE PAK AIR THE CASE THAT CHARGES UR iPHONE...