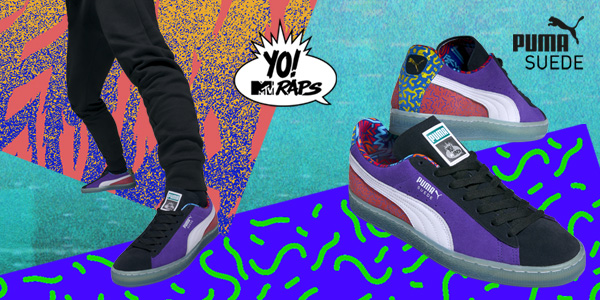 Sports company PUMA AND Global Retailer JD present the new PUMA Suede x YO! MTV RAPS. As a cultural icon of the 80’s, the collaboration sees an injection of newness and energy with fresh colourations, and the MTV signature sign off across three styles.

The first release features the identifiable MTV Raps scribbles as seen on the leather insole and heel piece, alongside a black suede upper, a white PUMA Formstripe and royal purple side panels for a bold colour-blocking that completes the shoe. A classic in its own right, the PUMA Suede first hit the scene in 1968 and has been worn by  generations of b-boys, artists, and street legends.

The Suede continues to be a style staple, made to last for all time. PUMA and JD have partnered with MTV on a YO! MTV Raps Streets digital content series in London, Berlin & Paris with artists Chip, Badchieff & Bosh which will be going live later this month.

YO! MTV Raps Streets is a fast-paced music storytelling format that takes music back to its source. In the episodes, the YO! MTV Raps host walks and talks with the artists around their neighbourhood to find out about the people and places that shaped them and the ones that still matter today. They will talk music and fashion influences, latest music releases, videos and future plans.

The first PUMA Suede YO! MTV RAPS drops on raffle on the 10th May on JDX. Then stay tuned for all three drops on 17th May. Available across Europe.