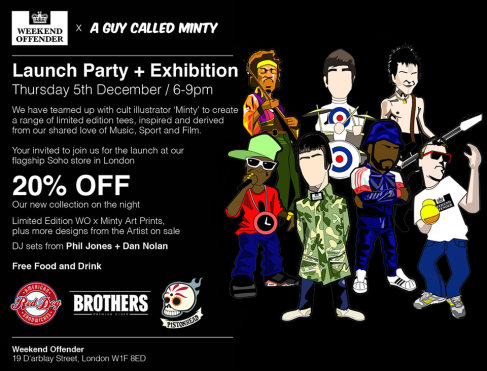 UK urban label Weekend Offender and Welsh illustrator, A Guy Called Minty are finally setting loose their graphic tees collaboration after previewing designs and characters in the build up to the release. The limited edition collection is inspired by the concept “Dream Teams”, featuring their favourite icons from sport, music and film under the names The Band, Usual Suspects, Diego and Kings of the Ring. To celebrate Weekend Offender is hosting the launch at their flagship store in Soho, offering 20% off on the night, limited edition prints, exclusive designs from Minty and free food and drink, with DJ sets from Dan Nolan and Phil Jones. It all kicks off on 5th December on Soho’s D’Arblay Street.

Neymar has Just Become the World’s Most Bra...

Neymar has Just Become the World’s Most Bra...

Channel AKA Ends Broadcasting After 15 Years!

A ViSUAL TOUR OF NIKE SB AT SIZE? CARNABY STREET