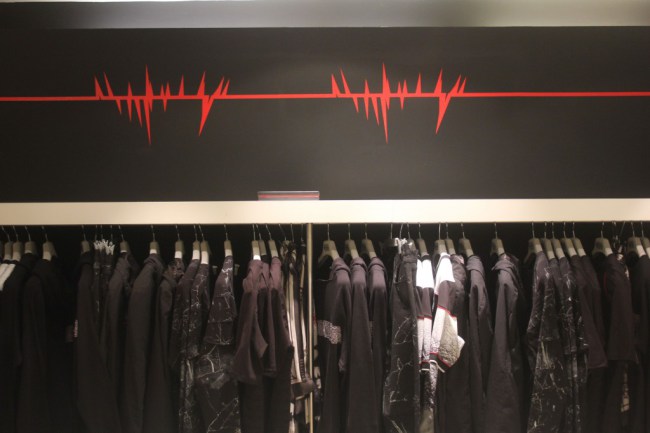 UK Fashion brand Trapstar London has gone from an underground exclusive brand that could only be contacted via Blackberry Messenger service, to an international movement coveted by celebrities such as Fabolous, Jordan Dunn, A$AP Rocky, Cara Delevigne, Rihanna and Jay-Z. The brand has recently invaded Selfridges with capsule collections, leaked news of a partnership with US clothing brand Roca wear and dropped some dope Chenille sweatshirts and all over logo print jumpers for SS14, that have seen demand for the brand grow hugely in the circles of the UK fashion crowd. Now the brand have launched a new brand and according to the team, it is a symbolisation of the progression and changes that the team have undergone. The new brand is known only by a red line which will feature on each garment instead of the Trapstar typography. Red Line’s debut collection is centered around natures elements—earth and water—and consists of Premium materials, a marble print and evolution prints across T-shirts, sweats, jackets, denim and accessories including a cape. The red line compliments the mainly monochrome style military and sportswear silhouettes. The collection is an exclusive collab with Harvey Nichols and will only be available in store and via their website.

Adidas Originals by Bedwin & The Heartbreakers

Did Off-White™ Use a Bob Ross Painting on a T-Shirt Without Credit?