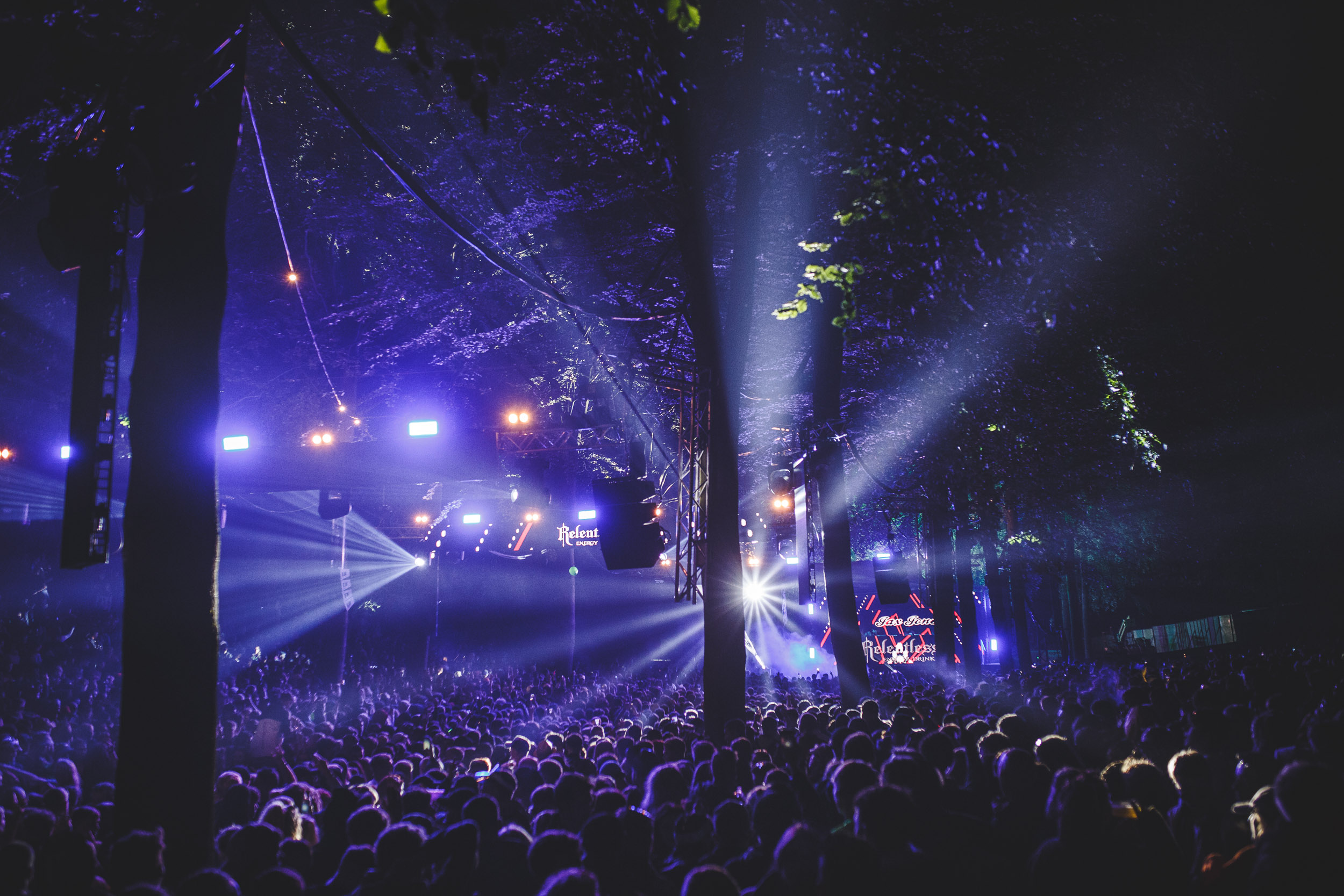 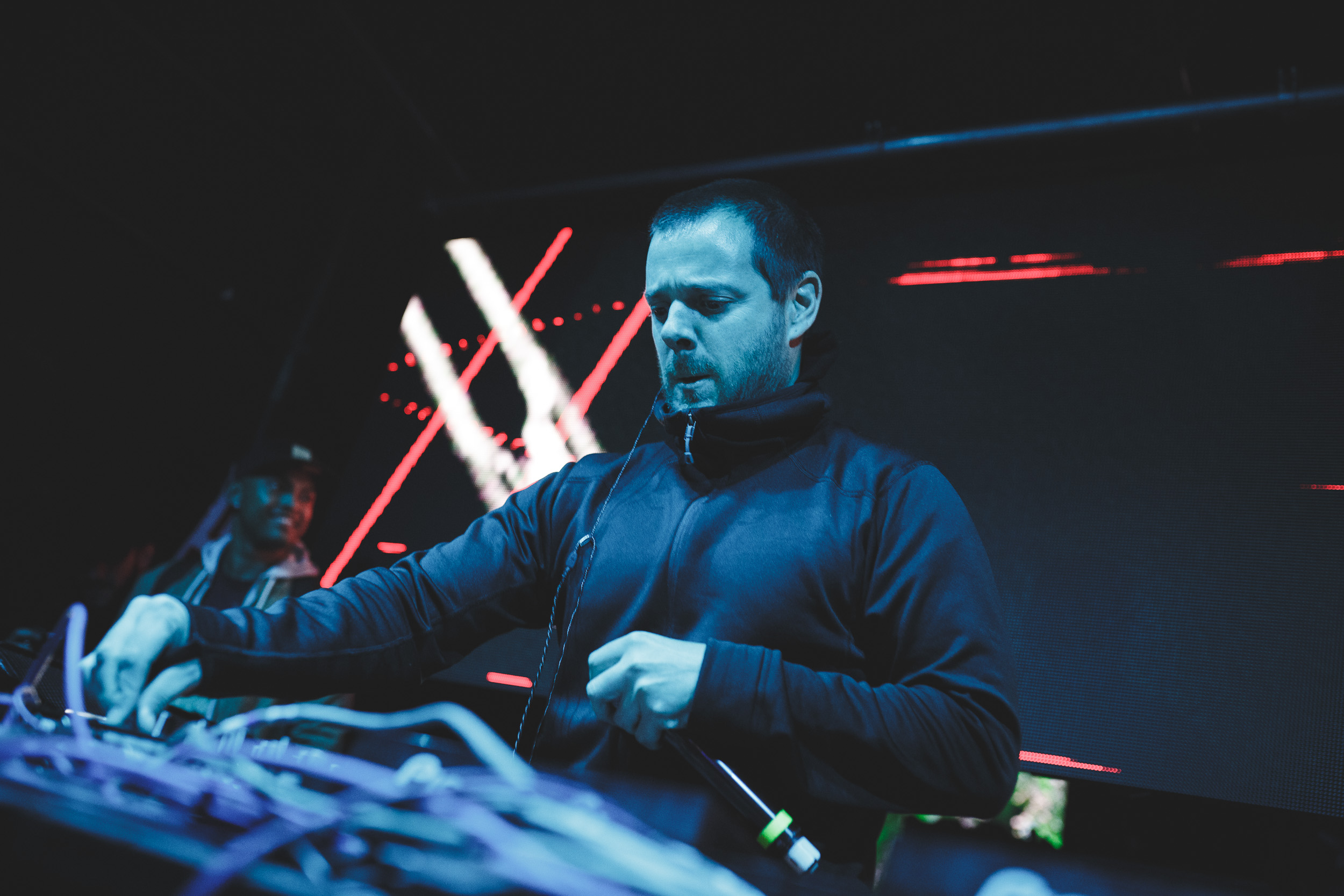 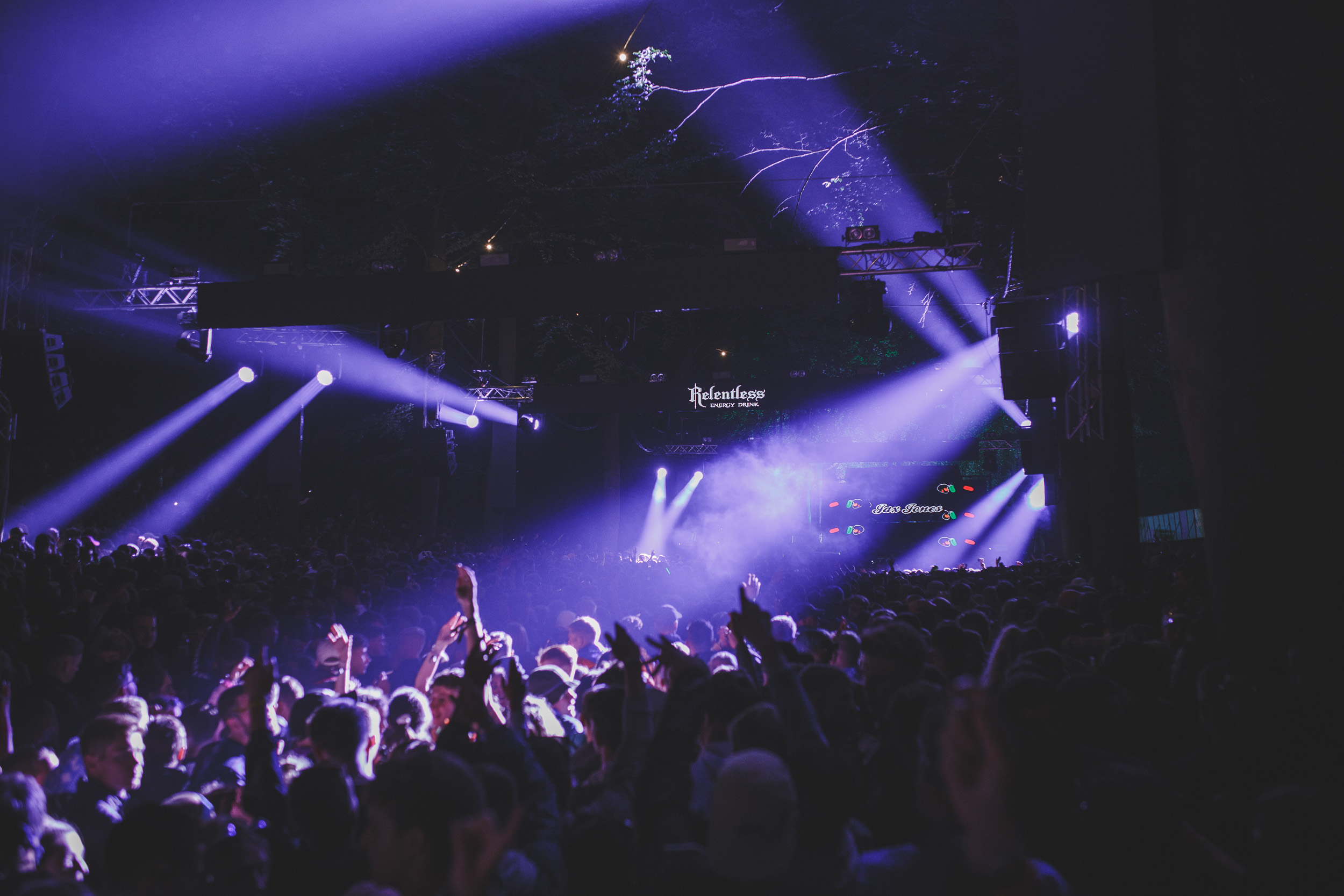 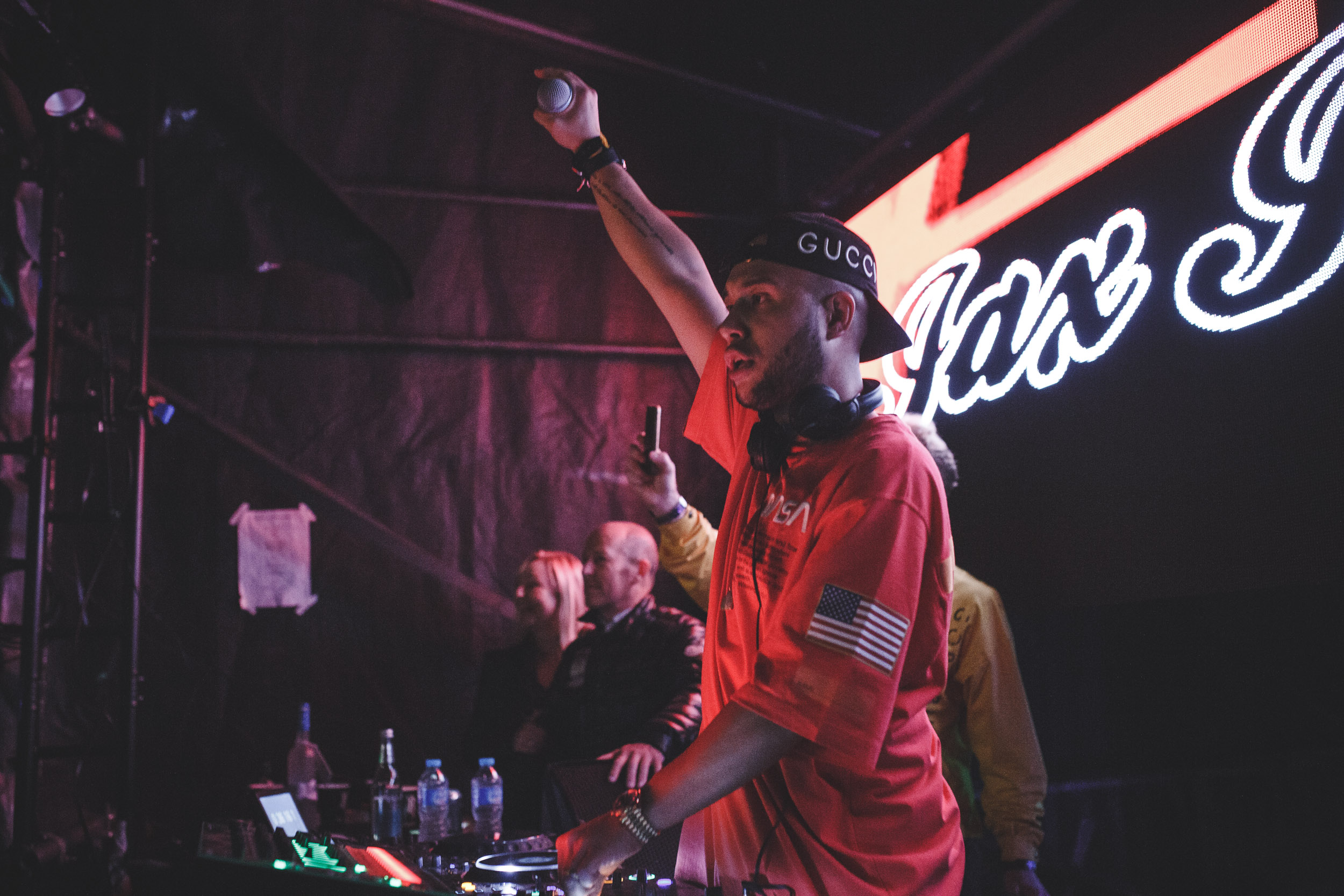 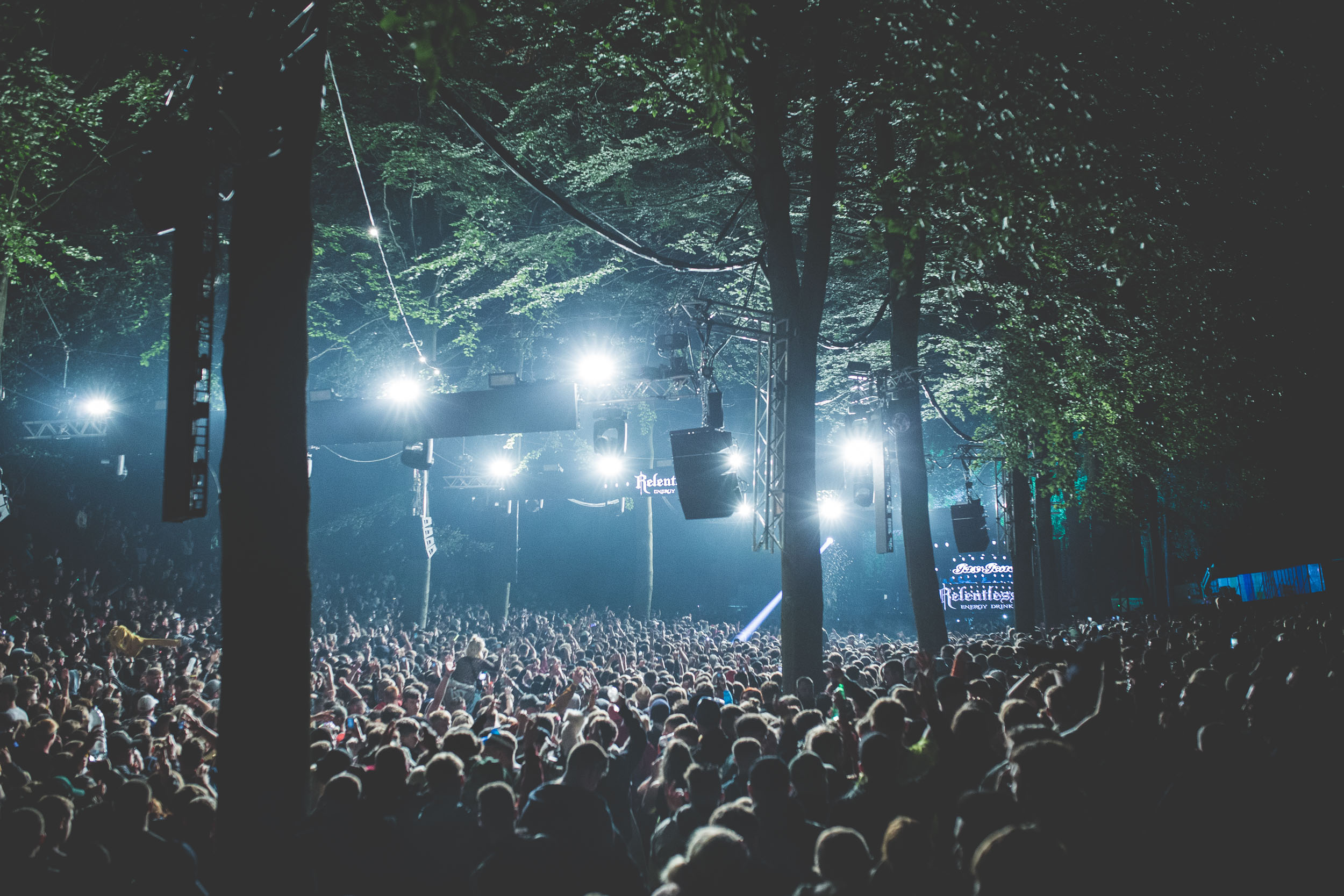 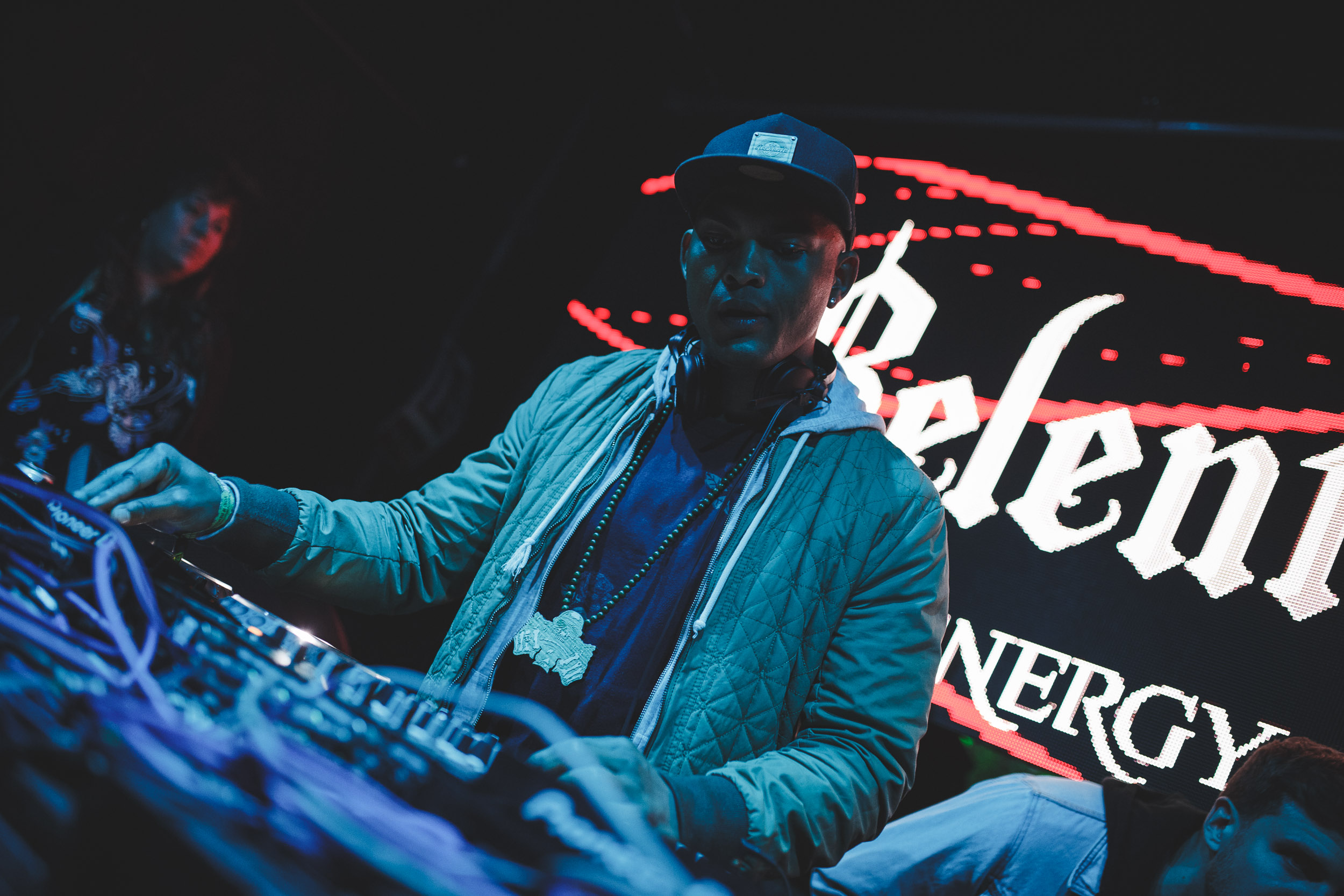 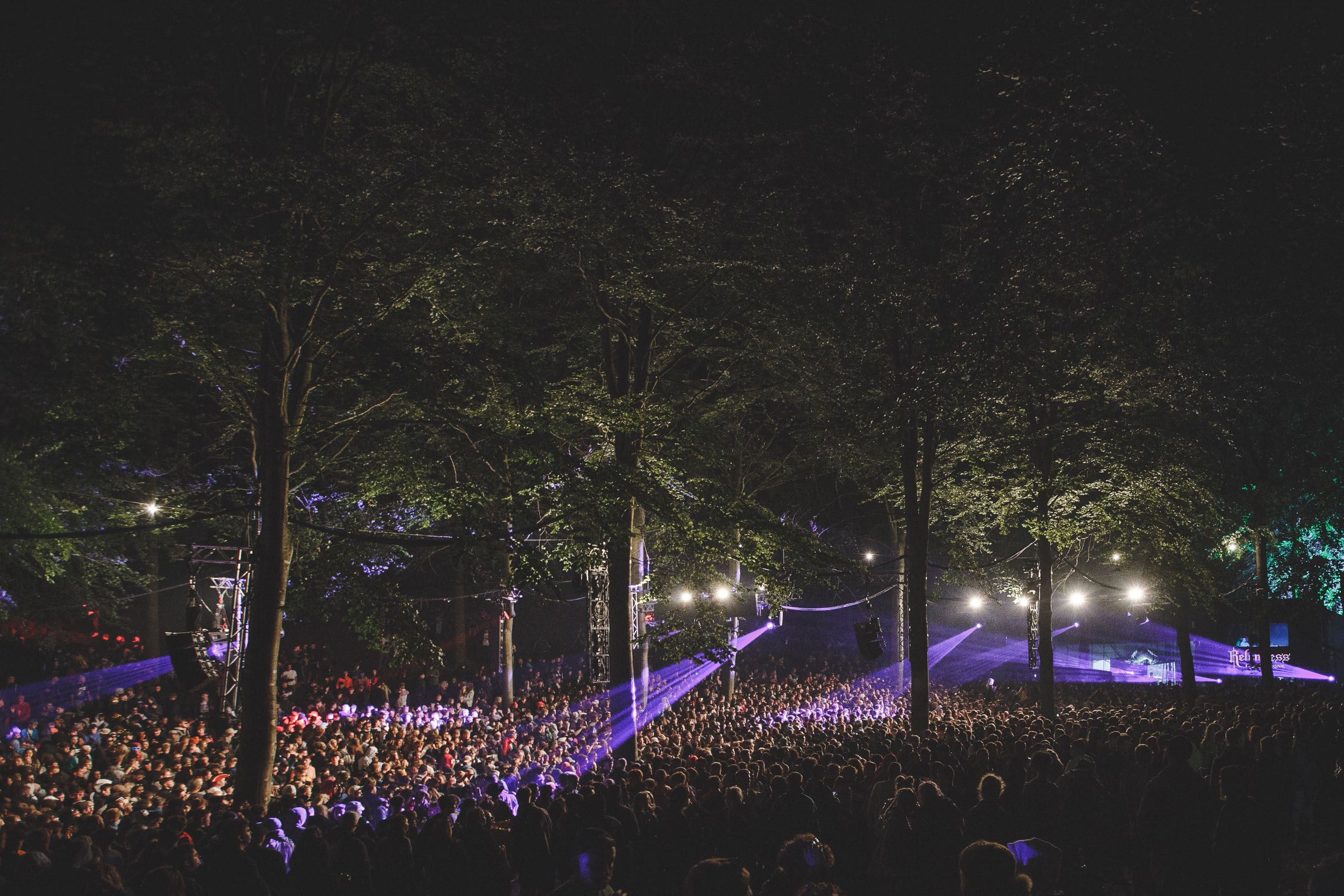 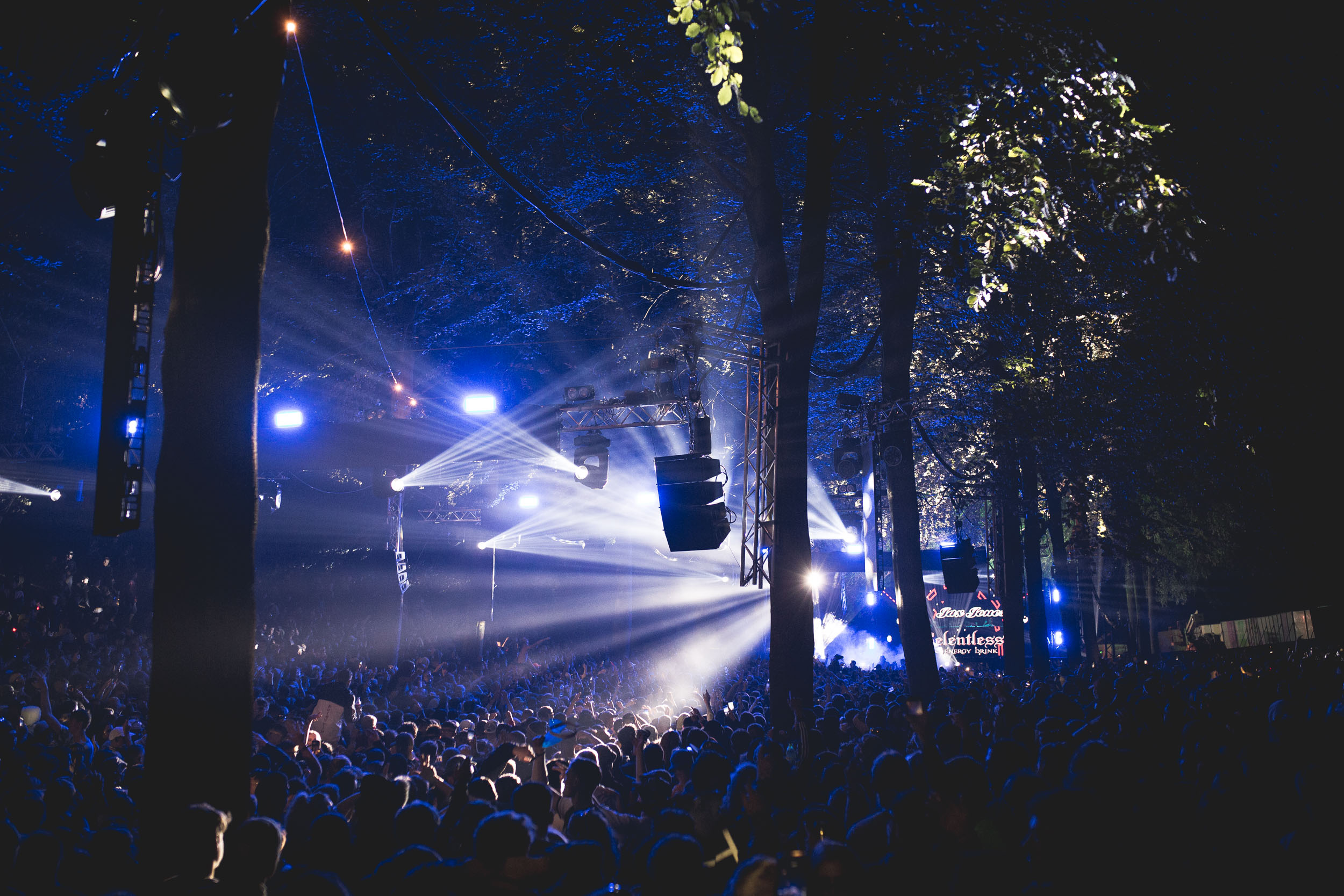 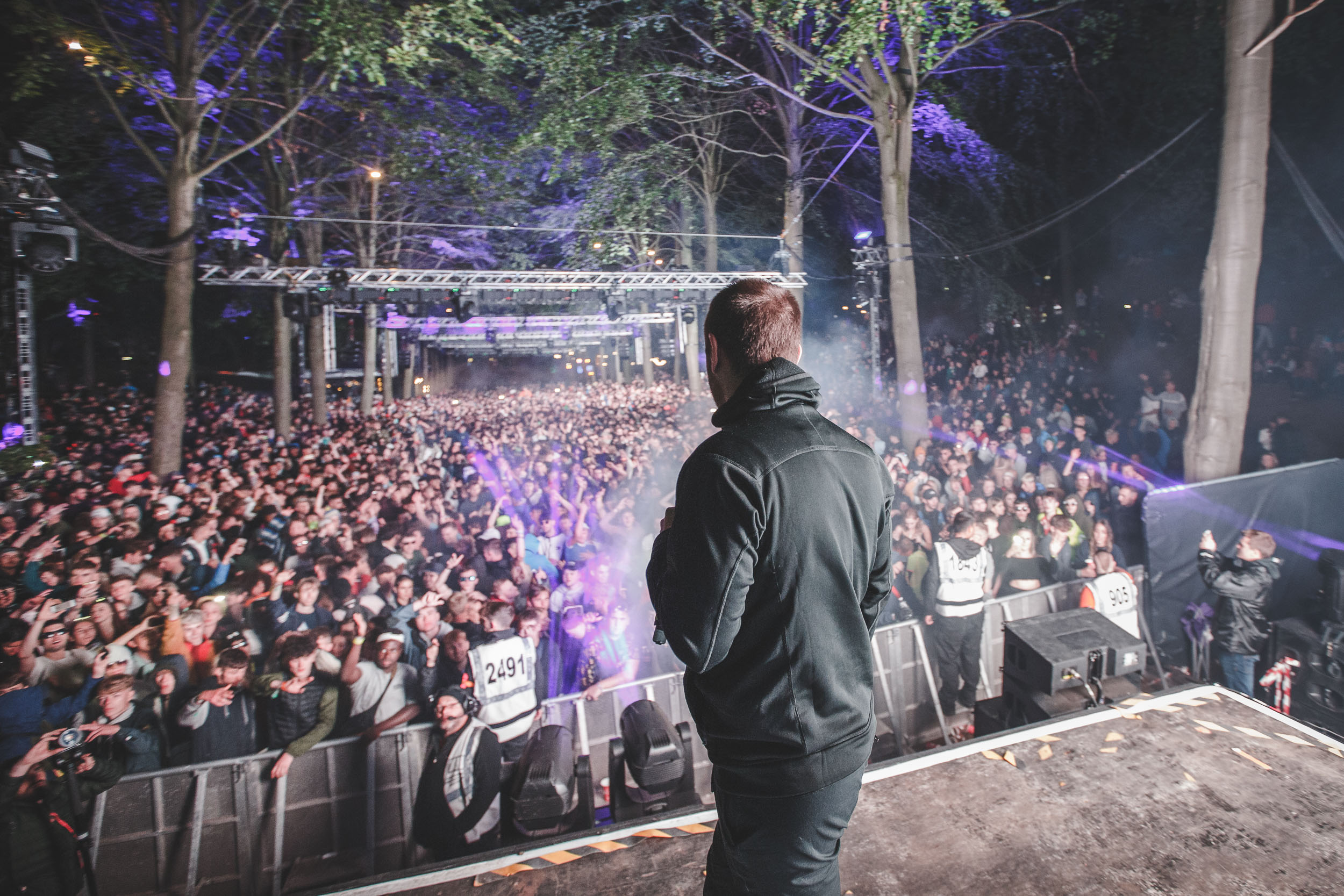 Relentless Energy Drink has been a sponsor of Leeds Festival since 2007 when they first rolled out their huge life-sized relentless cans at the Music festival, to promote and sell the Coca-Cola-owned energy drink. For 2018 The Energy Drink brand had their own late night sessions stage, playing House and Dance music, featuring the hottest talent in the game including; Jax Jones, Mike Skinner, Kolsh and Boston Bun. We were backstage with the team on Friday and were lucky enough to experience the vibes and enjoy some dope music. As well as doing our thing in the crowd and staying energised with cans of Relentless Energy Drink, we caught up with Jax Jones and Boston Bun directly after their sets to have a chat about the music genre that has managed to stay consistent and grow year after year despite the growth of other genres within the UK.

As well as sponsoring the UK Music festival for 2018, this year Relentless Energy Drink teamed up with DJ Mag for a competition that gave 3 upcoming DJ’s a chance to perform live on stage as well as win personalised headphones from V-MODA, a UDG creator backpack and an online music production course courtesy of Point Bank in London. As a platform that promotes upcoming talent, with our strapline ‘Breaking Through, Breaking the Traps’ we couldn’t wait to talk to one of the winners who had been chosen to play a live set the next night, Swansea born Dj Lindsey Matthews.

We would like to thank the team and Exposure London for giving us an amazing opportunity to attend one of the UK Music industry’s key events and be a part of their journey.

Check out our interviews and official Relentless stage pics below. 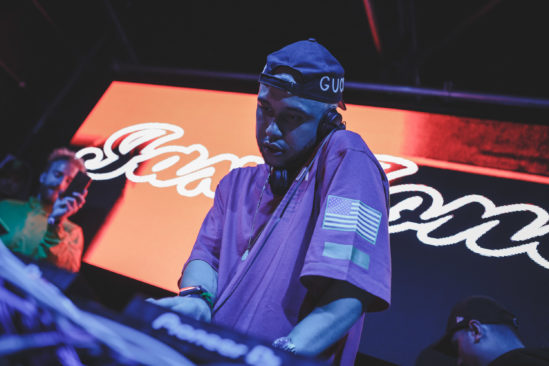 Jax Jones. is an English DJ, producer, and songwriter. He is best known for his 2016 single, “You Don’t Know Me”, which peaked at number three on the UK singles chart and “Instruction” featuring Demi Lovato & Stefflon Don. We sat down with Jax and spoke about his musical influences, performing at festivals, BRIT nominations & staying level-headed in the industry.

Has being from London influenced your music and style in any way?

Bro, you know how it is! It definitely influences me, In London, we have access to many communities, you can go to different places & get ideas whatever mood you’re in. You have a load of different people and places to draw ideas from. We also have a sound, I call it ‘London Crusty’, everything sounds a little crusty, we have our own sound, it can work for you and against you. In regards to my own music, I’ve become a little less crusty because the Europeans and Americans don’t really like it, in fact, they don’t even like their own music haha.

So, we are here at Leeds Festival, the place is buzzing, how does it feel to be here today?

Feels great, this is my second year performing at Leeds Festival, the place is buzzing as ever & the crowd is killing it out there. It’s always better when the crowd are giving back the same energy.

Do you still feel nervous about performing in front of loads of people?

I wouldn’t really say I feel nervous anymore. It’s more how the fans are going to receive it, I’m cool, I just hope that I have a good relationship with the crowd, that’s all that matters.

Nah, I don’t really change my processes. I’m out there looking to make bangers with all artists, of course you have to be logical, some tunes will do better than others but I have to keep the mindset the same to try and keep the levels at a high.

How did it feel being nominated for the BRIT AWARDS two years running?!

That is one of my best achievements to date, this was my second BRIT nomination but it was a shame I didn’t win. I genuinely thought we had a chance for best single but fair enough, my time will come. I know it.

Talk the creative process behind your song “you don’t know” with Raye?? It’s banging in every club, pub, shop, bar !!

Bro!!! I walked into the studio, I didn’t know what I wanted to do, I just wanted to make a song with drums and bass & the rest is history. I did not expect it to bang this much, 20 million streams on Spotify, are you mad?!?!

What are your goals musically for the rest of 2018?

My focus is to finish my album and to have a few more singles off the back of that. As a dance artist, the hardest thing is to drop an album, not for the sake of selling an album, but for the culture. I anticipate my album to be done by Jan.

How do you stay level-headed and deal with the pressures of being a Producer at the top level?

For me, a stable relationship is key. I’m married so I have that escape away from the music, when time gets tough, I just switch off, just relax with my partner, get away for a bit and then get back to work. It’s the art of being normal bro, master that whilst on top and its plain sailing from there.

Create all the time but stay ambitious and don’t be afraid to fail. 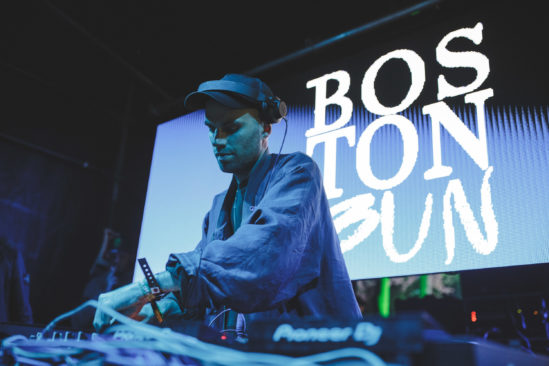 Extremely talented Dance music remixer Boston Bun has mastered the art of fusing popular tracks from different Genres with the relevant genres of today’s clubs, remixing everything from Electro into House and House into Acid Dance. Performing at Leeds Festival for the second time, we caught up with the French-born DJ and producer to discuss his journey.

How did you and Busy P connect, and how has it been being a part of the Ed Banger family?

They are family! I signed my first record with the Ed Banger family & since then we toured all over the world and created the ‘Ed Banger House Party’ which is DJ’ing back to back at festivals and clubs.

How did the name Boston Bun come about?

My DJ name came from one of my House and Techno bands from the 90’s called the Detroit Gun Troopers. They had a city in their DJ name so I had to follow tradition. Side note, Boston Bun is both a pastry and a sexual thing.

What has changed since you released ‘Just For Freaks Vol. 1’, talk to us a bit about that?

In the space of 3 years, I moved to the UK & I started to drop radio singles solely for the club scene which was different to the French music scene. You can only be either a commercial DJ or a club DJ in France, never both which limits your audience scope.

How much of the French culture has inspired your music?

Its been a massive influence, I learned my trade in France, we have a very methodical way in which we create music and that has been instilled inside me from a very early stage & I’ve gone on to use that wherever and with whoever I’m making my music for.

How does it feel being at Leeds festival for the second time?

Amazing. the last time I played here, I played for 1 person, super weird, so this is a massive step up from that! 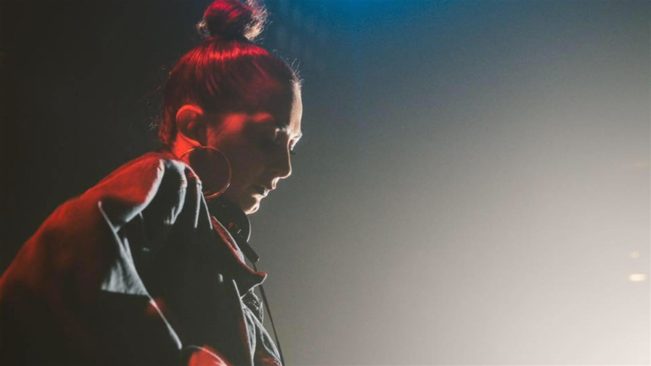 Female DJ Lindsey Matthews was discovered whilst DJ’ing out in Ibiza and has since completed a two-year residency in the party capital of the world and released her Debut E.P ‘Two Feet’. As the winner of the DJ Mag and Relentless Energy Drink competition she won the chance to perform on the Relentless Stage at Leeds Festival, we spoke to her about her journey.

You’ve just come back from Ibiza where whilst on holiday you completed a 2-year residency, tell us how that opportunity came about?

I went out to Ibiza because I loved the scene and music, whilst I was out there I was spotted playing a set at Sankey’s and it took off from there.

What has the experience done for your confidence and the direction of your career?

It opened my eyes to different types of music and how people DJ and guide the crowd. The whole experience has worked wonders for my confidence and I can now hold down a massive crowd and have everyone jumping.

How was the transition of moving from Wales to London?

I realised that I wasn’t going to get far coming from a small town in Swansea so I moved down to London. Living in Wales, its more a clubbing scene than a music scene, people don’t really care about your achievements and music as much as they would elsewhere.

I love it! I feel this year a whole load of female DJ’s have emerged, I love the fact that we are championing it, we bring all the sexy vocals and attitude, that’s what the people want! Come on, you know it too!

You are doing a set tomorrow on the Relentless stage courtesy of the Dj Mag x Relentless Energy Drink competition what does this opportunity mean to you?

It means the world to me, you never know who’s watching you! I want to go out there and show people what I can do and give the crowd what they want to hear.

What do you feel your signature sound is?

I’ve got a mix of Tech House with minimal, like a rolling baseline with an acapella. I don’t want to play Tech tracks that people have heard before, I’ll trawl the net for days to find something different.

Talk to us about the creative EP ‘Two feet’

I wanted to try to merge vocal sound with Romanian House. The sounds are a mixture of upbeat, mellow to heavy baseline, 7 am the last song of the night sort of vibes. It caters for everyone.

After this, I’m going to send over my tracks to some labels & hope they can pick it up. I’ve developed my own signature sound now, so I feel confident that my music will get the recognition it deserves.

To find out more about Relentless Energy’s full stage line-up at this years Leeds Festival, go to relentlessenergy.com

Headie One and Not3s Link Up on, “ISSA Mood”