Capturing the world’s eye as not just another festival weekend, but a long-awaited reunion of culture, incredible artists and stunning scenery – Afro Nation Portugal 2021 is already shaping up to be the defining summer moment of 2021, with things just getting bigger from here…
Already boasting an unprecedented lineup of pioneers, new superstars and the hottest in the game right now, Afro Nation Portugal 2021 takes things up to new levels with the news that Megan Thee Stallion will head to The Algarve next July. Undeniably the most talked-about artist on the planet right now, Megan has broken records and charts at every turn – cementing herself as a voice leading a new generation in defiant and immediate modern hip-hop. With her recent Cardi B collaboration ‘WAP’ soundtracking summer once again (following last year’s huge ‘Hot Girl Summer’), Megan Thee Stallion sits as an in-demand favourite the world desperately wants to see – and her appearance at Afro Nation Portugal 2021 promises to be a memory fans will be talking about for years to come.
Rich in a whole world of different sounds, artists and cultures – Afro Nation Portugal has everything covered for a huge summer moment. Whether it’s the biggest names in global Afrobeats, US hip-hop, UK rap or the exclusive Dream Weekend stage featuring the best in Caribbean culture – it’s all gathered in one place: Afro Nation. Jamaican dancehall legend Bounty Killer heads to Afro Nation Portugal next year with a rich and powerful back catalogue of party anthems, ready to cause a storm on Praia De Rocha beach like nobody else can. Dancehall raver Ding Dong also joins the party, serving up sun-kissed moves that are sure to have the Afro Nation crowd in a frenzy come next July. With ‘Tira’ trio OS Santiegos also confirmed to be joining the party, Afro Nation Portugal 2021 is the weekend the world has been waiting for.
Megan Thee Stallion leads these new additions, joining an incredible lineup across the Afro Nation Portugal weekend, spread across multiple stages in a stunning beach location. Whether it’s Wizkid, Burna Boy, Skepta, French Montana, Davido, Rick Ross, Popcaan, Mavado, Krept & Konan, Koffee, Young T & Bugsey, Beenie Man, Ms Banks, Teni, Diamond Platnumz, Chronixx, Rema, Machel Montano, Not3s, Olamide, Tion Wayne or the countless other standout names set to make their way to Portugal next July – there’s simply no competition. Afro Nation Portugal 2021 is the crowning moment, and the world is invited.
Upon release of general sale tickets at the start of September, Afro Nation Portugal 2021 saw unprecedented demand – with tickets flying out in record time. With only a limited number of weekend and VIP tickets still available, fans are encouraged to book their place on The Algarve next summer ASAP. Full details and packages are available from:
https://afronation.com/ 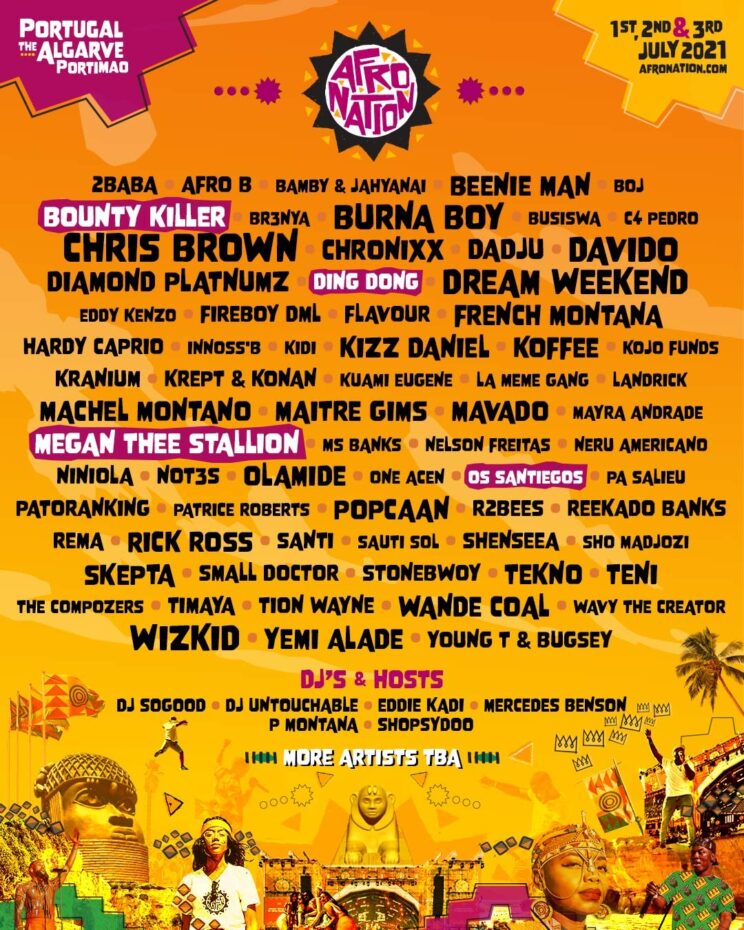