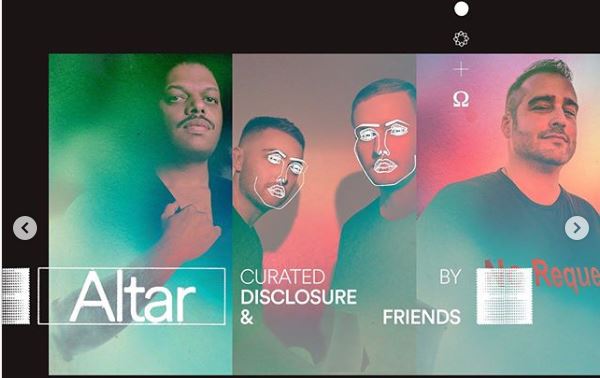 In celebration of their latest studio album ‘ENERGY’, Disclosure announced on Instagram today that they have teamed up with Spotify to guest curate its hugely popular alternative electronic playlist ‘Altar’.

Having enlisted their friends, who just happen to be some of the world’s most influential DJs, to help out, the partnership will begin on Friday 4th September. Kicking things off are house titan Kerri Chandler and genre-defining Todd Edwards joining Disclosure to curate a playlist including everything from house classics to 90s garage and more.

Tuesday 8th September will see London’s dubstep pioneer Artwork join the music duo on a collection celebrating the influences that contributed to their earliest work. Berlin house icon CINTHIE and globe-trotting DJ and producer Honey Dijon will wrap up the week-long partnership on Friday 11th September as they partner with Disclosure to bring together some of their favourite tracks of the moment.

The playlist will host tracks from some of the world’s most prominent artists from house, UK garage, dubstep, contemporary electronic and beyond such as Channel Tres, Mount Kimbie, Erika de Casier and more.

Disclosure said, “We are super excited to be curating Spotify’s Altar playlist for the next 12 days. We’ve got three instalments centring around a different genre and time in music that is special to us. We also wanted our friends to be involved, so expect carefully curated selections from us along with the legendary Kerri Chandler, Todd Edwards, Artwork CINTHIE and Honey Dijon. This was a lot of fun to put together… enjoy!”

Mike Skinner Talks Giggs, Kano & Waking Up With Ice Statues With Not For The Radio