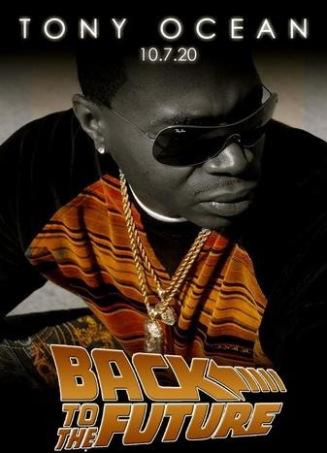 Tony Ocean, school teacher during the day and rapper at night, began recording in 1998 with the group Suited-N-Booted (S-N-B). In 2000 they released their first album a double CD entitled ‘Darkansas Burning’. After earning local success, S-N-B released ‘Life On The Other Side’ in the summer of 2003 . In 2005 S-N-B recorded their final group album called ‘Balling In Position’

As a result, Tony decided to focus on his solo career and in 2007 released his first solo project called ‘Hurricanes and Yachts’. After receiving great reviews, Tony Ocean released his second project, ‘Back To The Future” in October, 2009. The album featured vocals from a few of his students. In 2010 Tony signed a digital distribution deal with JMD Records (Mondotunes) and they re-released “Back To The Future”. With the streets asking for more, in 2011 Tony released “24k” the official mixtape. Tony recently finished his third solo album entitled “Cloud 9” which is set to be released globally in 2013.

During Tony Ocean’s successful rap tenure, he obtained a BA degree from Philander Smith College, and is currently four classes away from completing his Masters in Business Administration.

How would you describe your music?

My music is highly educated global street music filled with the spirit of racial predudice found in the dirty south.

What do u feel that you are bringing to the game that is unique?

I’m bringing real street knowledge with a sense of responsibility so the uneducated and the highly educated can both enjoy. I’m putting the game in motion by using life skills and the same leadership qualities found in corporate society, mixed with a passion for street life.

Who are your current influences?

We see that you have collaborated with your students in some of your tracks, it is very encouraging to see this relationship between student and teacher. Do you feel that with music you can really connect with the students?

My music is exactly true reality from my struggle during childhood and as a teen. It is important for students to see positive adults who made it out the struggle to become influential. My music is an inside look of my journey from the bottom to the top.

We see that you’re very close to getting your masters in Business administration and your also a teacher, how do you manage to fit in a rap career as well?

It’s second nature. The grind started before high school and has grown stronger now that I am a graduate student. Going to class, doing homework, grading papers, writing and recording songs is a lifestyle I own, its part of my identity. You see it’s a perfect fit, that soon will consist of only a rap career and running Oceanic Records, once my MBA is complete.

Arkansas is in the South of America near Mississippi do u feel like you are carrying the torch for your city in the rap game?

No doubt. From attending former president Bill Clinton’s first inauguration to my BA in education soon to be an MBA to releasing 10 mixtapes and 9 albums, along with a huge community and international fan base, I feel I got my city stuffed inside a duffel bag being transported with me world wide.

How interested would you be in doing collaborations with international artists?

I am very interested in recording collaborations with international artists. Earth is my playground, I have no borders or boundaries in my music. I am looking forward to working with international music artists as I break into the global music market.

Thanks to everyone who supported the Suited-N-Booted movement and continued to support the success of Tony Ocean and Oceanic Records. Anything is possible when you work hard and believe in God. Just speak it to existence, because the sky is the limit.

Lil Yachty and Migos Link up for ‘PEEK A BOO’

Be the first to comment on "EXCLUSIVE INTERVIEW WITH U.S RAPPER TONY OCEAN"