The world has been waiting for that one music event that will come to define summer 2020 and the first-ever Escape 2 The Island is set to be it for 28th – 3oth August 2020.

Heading to Malta this August Escape 2 The Island is set to burst into life with a range of unmissable performances from some of the most influential voices in modern British music – nestled under stunning Maltese skies.

Leading this bill are three arena-sized trail blazers all ready to pop this party into another league. Superstar, AJ Tracey will be live and direct with a set this August, with smashes like ‘Ladbroke Grove’, ‘Dinner Guest’, ‘Thiago Silva’, ‘Buster Cannon’.

Joining AJ Tracey on the bill is his ‘Rain’ collaborator and the biggest breakthrough name of the past 12 months, Aitch.

Since first topping the UK charts with the Dave-featuring ‘Funky Friday’, Fredo has continued his rise as an undeniable UK superstar. Continuously dropping new music at a rapid rate, his unmistakable style sets him apart from the rest of the pack – and you just know when the likes of ‘Netflix & Chill’, ‘Hickory Dickory Dock’ and ‘Ay Carumba’ that Escape 2 The Island is going to go even bigger.

An incredible supporting cast featuring the biggest and best in modern UK culture will join AJ Tracey, Aitch and Fredo, from the chart-conquering sounds of Headie One, Young T & Bugsey and Yxng Bane to the fierce party swagger of S1mba, Swarmz, MIST, Jay1, SL, Ms Banks, Charlie Sloth and Unknown T as well as the hottest newcomers in M1llionz, OFB, Dutchavelli, Ivorian Doll, Shaybo and many more all heading to Malta this August to reopen the summer in style

With very low rates of Covid-19 and incredibly detailed and diligent planning from the Maltese government, the country is now open again for tourism to many parts of Europe including the UK from July 15th. All hotels, bars, restaurant’s, clubs and beaches are open with stringent procedures in place around social distancing and testing.

Escape To The Island is a jointly promoted enterprise with full support from the Malta Tourism Authority, Visit Malta, Bassjam and Metropolis

Presale registration for Escape 2 The Island is available now here – with those registering receiving first access to presale tickets from 5pm on Thursday 2nd July. 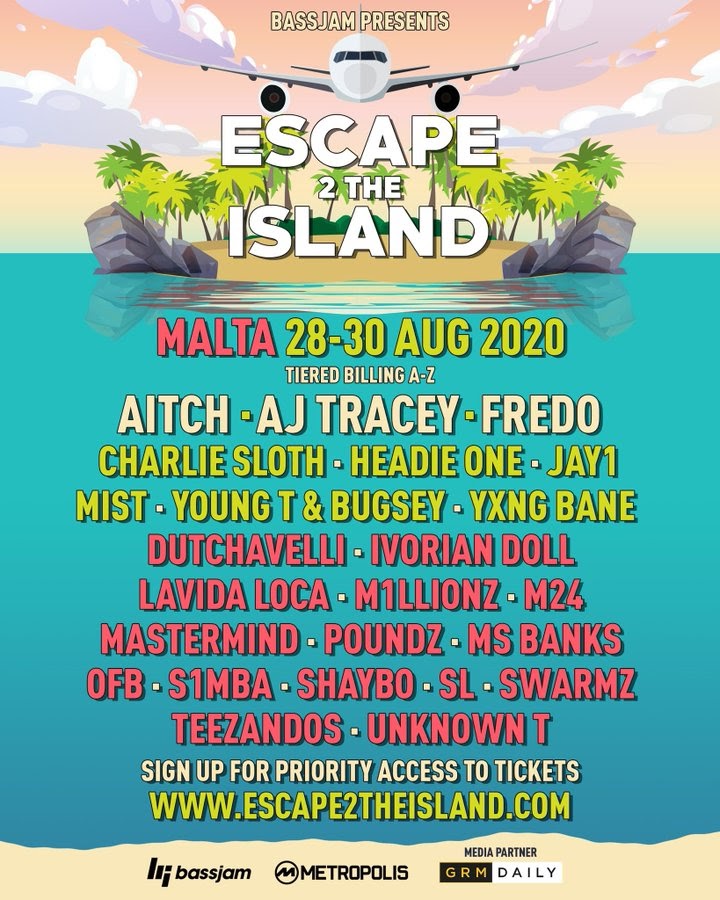