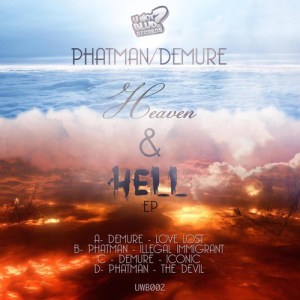 We caught up with Demure / Phatman on the release of his new EP, Heaven and Hell on U Wot Blud Records.

‘The EP compromises of 4 tracks perfectly showcasing the opposite ends of the dubstep world – Demure /Phatman take us on a journey through dubstep, from the depths of hell to the delightful sounds of heaven, perfectly showcasing his versatile talents and all that’s good in 140 bpm music – whether you like it hard and heavy , or light and musical, there is something for you in this EP.’ – Melinki – U Wot Blud Records

Zimbabwean born producer Langa Manyoba is slowly establishing a reputation as a producer to keep an eye on in 2013. Launching his musical career with a tight minimal Dubstep/2step grove to his productions.

Starting off with his alias “Phatman”, which started off with badly produced grime and hip hop now mainly consists of tear out and the harder style of Dubstep.

Along with securing a few gigs he has had radio plays from 1xtra, Get Darker and Kiss. However as time progressed a second alias was launched to

create a more expressive melodic style of music. Originally a collaboration under the name Unknown individuals (no longer a collab) Demure was born.

Demure is slowly turning heads in both the European and American scene with his colourful minimalist tracks. He has gone from releasing his debut (Luminescence EP) on the respected Dank n Dirty Dubz label to remixing artists such as Kannamix, Johan Vilborg, Holly Drummond, Laurelle & Alexander and gaining the nod from the Strata music group for his LAMB remix.

Since moving to the UK 5 years ago from Africa, Langa has fallen in love with the UK music scene. He has mainly been mesmerised by the melodic and atmospheric styles of music which range from the likes of Brian Eno, Phaeleh, Author, Rusko, Digital Mystikz, Burial, Jakwob and Syknro to mention a few.

What made you decide to use two aliases? Also is there any reasons behind the names?

Originally Phatman was an alias I had for years, since school days. As I matured and gained a little bit more self confidence in my music I thought it was time to start something that was more on the expressive and melodic side. It’s there were I started Demure. The name for the alias was perfect as it represented me as a person and as an artist compared to Phatman. By coincidence the names sort of represent Binary Opposites of themselves. One side aggressive and the other more relaxing and calm.

It’s mainly the environment for me. What is around me and the events at the time often reflect onto my music, other things such as other artists, movies, documentaries do play a part, when I hear a unique sound from someone else I find myself questioning how they made it. The main artists who influence me are Brian Eno, Phaeleh, Author, Koven, Hanns Zimmer Pote, Burial, Jakwob and Syknro to mention the few.

Do you feel your Zimbabwean roots influence you when you are creating music?

To an extent, In Various tracks I try include a few African samples here and there, and the use of other instruments such as the Mbira or the marimba, its normally subtle and unnoticeable in some of my tracks.  It’s something I really want to work more on in the near future.

What was the first record that you bought?

First record I bought was R- Kelly – Chocolate Factory on cassette…..hearing myself say that makes me feel sad… I was young.

Tell us about this first release on U Wot Blud Records and how it came about.

I had known Melinki for a while and he came up with the idea of releasing a joint EP, it was perfect as I had intentions of doing it but not the platform for it at the time. The label was versatile enough to support both sides of the EP.

When can we expect the next release?

After the Heaven and Hell EP, there will be a release on Silk Music for my remix Johan Viborg, A Phatman EP which is still TBA. Im currently working on a Demure album, I’m still trying to balance University work with music so its delaying things a little.

You can purchase the EP off the following websites:

Also check out some more of his music on his could clouds here:

JUELZ SANTANA IS ON FIRE!