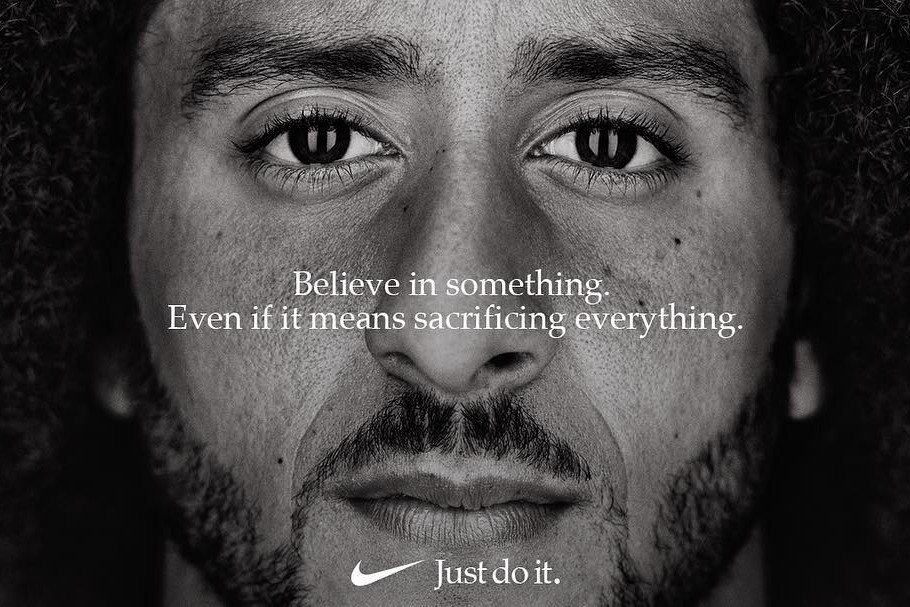 The new ‘Just Do It’ campaign from Nike has set immense levels in the game for supporting racial inequality by placing athlete Colin Kaepernick on the face of its “Just Do It” campaign.

“We believe Colin is one of the most inspirational athletes of this generation, who has leveraged the power of sport to help move the world forward,”

said Nike’s vice president of brand for North America Gino Fisanotti to ESPN. Colin Kaepernick, the former quarterback for the San Francisco 49ers, came under the media spotlight for choosing to sit during the national anthem in 2016, and then later kneeling against racial injustice and police brutality. Nike’s poster, which prominently states “Believe in something, even if it means sacrificing everything.” is a powerful statement that the Beaverton, Oregon company is expressing, referring to the Trump administration’s view on kneeling players of the NBA and NFL. The bold protests eventually led to Kaepernick being indirectly forced out of the league.

The actions sparked controversy between the NFL players and the Trump administration, with the president stating “Wouldn’t you love to see one of these NFL owners, when somebody disrespects our flag, to say, ‘Get that son of a b—- off the field right now, out — he’s fired!’”.

Despite being a Nike athlete Nike has not used Kaepernick for its campaigns for two years until now.

Senior reporter Charles Robinson also shed some insight into the deal between Nike and Kaepernick via Twitter, saying “- It’s wide endorsement. He’s going to have his own branded line. Shoes, shirts, jerseys, etc. There will be Kaepernick apparel.”

Check out the campaign below.

Believe in something, even if it means sacrificing everything. #JustDoIt