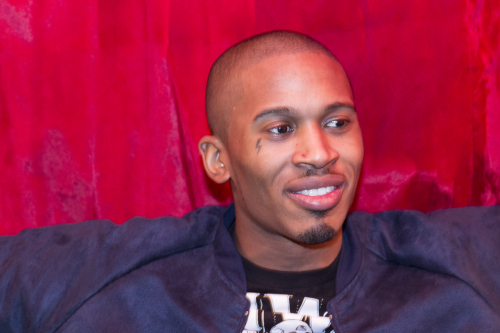 Scorcher (real name Tayo Jarrett) is a Grime MC / Producer from North London. Scorcher began his journey as an underground MC, forming part of ‘The Movement’ crew in 2006 with fellow MC’s  Wretch32, Devlin and Ghetts. Gaining recognition with controversial diss tracks aimed at former N-Dubz member Dappy, Scorcher has worked with a variety of UK artists including Ed Sheeran, Talay Riley and Wretch 32. as well as being a Music artist Scorcher has starting an acting career, which has seen him star in UK film ‘Offender’ and UK drama series ‘TopBoy’, we caught up with Scorcher at UK Music showcase The Drop’ last month to chat about his latest projects.

You have been very quiet. Why have you not been making as much noise in the UK scene lately?

I’ve been doing a lot of recording, getting the quality of work ready for the E.P. Once it drops I’ll be doing more shows, Music and material.

Describe the style of your single ‘It’s all Love’?

I don’t know what style to call it,  I wasn’t trying to make anything like anything else, I just wanted to make music. We heard the beat, which was a loop at the time and we liked it so we went with it.

You have done a couple of collabs with Talay Riley now ‘Good as gold’ and now ‘It’s all Love’. What is it about him that you like so much?

He is just a dope guy all round, he is a sick artist, brilliant writer and has a great voice. When I work with Talay Riley, he captures the vibe that I’m in, If I could sing, he seems to be doing what I would do.

What other artists do you plan to collaborate with this year?

I don’t really set plans. I think things just naturally happen. Many artists who’s music I appreciate, I end up working with them. I do have dream collaborations though, I would love to work with Swizz Beatz one day.

What production projects have you been involved in lately?

Mercston’s ‘Back to 95’ E.P was the last thing that I was involved in, that was a sick project. Since then I’ve been working on my own features here and there but I wouldnt realy call them projects..

What Music artists are on your phone or on CD in your car right now?

The latest download is ‘Rick Ross’. My favorite track on there is walking on air. But you know who I’m bumping at the moment, some French rapper called ‘Booba’ he is cold.  One song that I’ve been rinsing called ‘Turphew’. I know all the words to a French song and I don’t even know what he is saying (Laughs).

What advice would you give to aspiring UK music artists?

Be yourself before you worry about anything else. Also find your own lane. It might take you 100 years but once you find your own lane and people embrace that, you will be good forever. I think that the artists that are the most successful are the ones that last the longest, and have the biggest impact.

Outfit of the Week (Readers Style)