UK Rapper Cadet ( Cadet Cadet ) tragically passed away in a car accident en-route to a performance in the early hours of Saturday morning. The family released a brief statement to Instagram:

“We the family of Blaine Cameron Johnson otherwise known as Cadet (Underrated Legend) would like to share the sad news that during the early hours of 9th February 2019 he passed away as a passenger in a taxi, en route to a performance”, the statement reads.

“Right now we the family appreciate your patience and will share with you any information as and when we can”.

Following the news, fans and industry friends flocked to social media to pay their respects and share their memories prompting the family and his cousin Krept ( Krept and Konan ) arranged a memorial get together in Hyde Park the following day. During the memorial Cadets, mum made a touching speech encouraging young men to express themselves and not hold in their anger. We would like to say R.I.P to Cadet and pay our condolences to his family in these hard times. 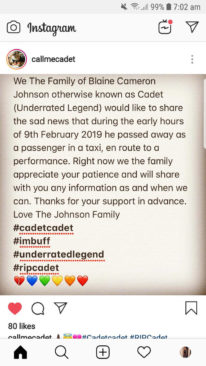