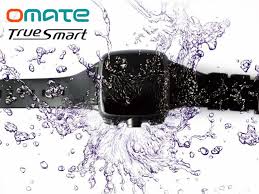 Smart watches are here and whilst the majority on the market require the aid of a smartphone/tablet the TrueSmart can run by itself. Powered by a 1.3GHz dual-core processor and running on Android 4.2 the device is the first smartwatch to do this. The Omate True Smart is on Kickstarter raising funds and it has been such a hit with tech fans that less than a day after launching Omate reached their goal of $100,000.

Be the first to comment on "The Omate TrueSmart, a Water-Resistant Smartwatch 2.0"