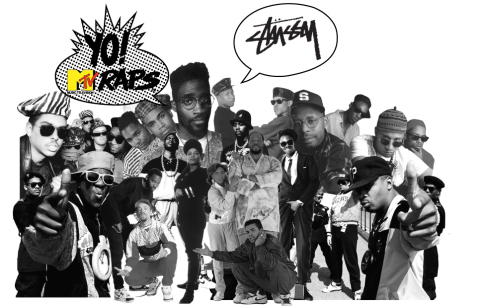 On August 6th 1988 Yo! MTV Raps first broadcasted on MTV. Hip hop back then was a very underground culture, not compared to today and Yo! MTV Raps managed to broadcast the culture and rappers to a mainstream audience. It could be said that this was a ground breaking time, as it is when Hip Hop started to influence the pop culture. Now Hip Hop is the biggest genre of music, could this be thanks to Yo! MTV Raps?

Stussy are rightly paying homage to the groundbreaking series, with a collection of T-shirts, hoodies and jumpers. They will feature some of the iconic artists that featured on the show. The collection is awesome check some of the pieces out here and the videos to explain it.

Stüssy x Yo! MTV Raps – Part 2 – Fashion in the Golden Age of Hip Hop from Stussy on Vimeo.

Be the first to comment on "STUSSY X YO! MTV RAPS"