Born in Scandinavia, raised in Denmark, and now living in London, Rapper Negash Ali spent most of his childhood in a refugee camp—But his love for Music set him free. With a group album, a solo album and a catalogue of Rap artists including Wiz Khalifa, Jadakiss and Ne-Yo that he has worked with. Negash has just released his introduction to the UK, a genuine up-tempo, Rap heavy body of work , entitled ‘The African Dream’, filled with poetical but hard hitting tracks like his latest single ‘Fire and Sky’.  We sat down with him to find out more:

What qualities do you feel that you bring to the UK Music scene that are unique?

Automatically cos I wasn’t raised here, you know, I have different influences, that come across in my Music and I like to do a lot of storytelling in my raps. I just feel like I bring that background with me as well as that, I’m super diverse, from alternative Hiphop to regular Hiphop with lively beats.

What influence do you expect to gain from being based in the UK?

I came from Denmark and Paris where there’s not a lot of room for Subculture, so I came here to be influenced by all of the subcultures and to embrace the fact that you can do more, you don’t have to worry about not fitting in in a certain place cos theres so much room.

Which artists from the UK influence you ?

Tell us about Fire in the Sky, it’s your newest single off of the E.P African Dream, Why is your story important to be told now?

I think its important to tell my story now, because when making the E.P I felt that I was reconnecting with the main reason why I got into Music. I had that same emotion from when I was writing my first song. With this E.P it was my time to let people know that I am definitely in that race, to put the gloves on and let every rapper know that I’m coming for them, so that was one aspect and also to let  people know that I stand for something real and that I stand for overcoming stuff and I don’t believe in Limitations. 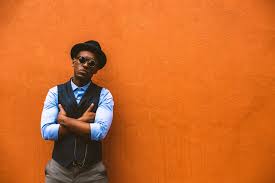 Tell us about Your New E.P The African Dream:

Because of my background and not really feeling at home anywhere, you know, being rootless and restless I acknowledged that I might not be able to live in Africa but do have a home there, so its about having to find a point of Alchemy where both those cultures can coexist. I feel like the personality that is then created is a dynamic personality and just the expression of that in my scenario is the African dream

Would you say that this E.P is a true representation of where you are at Musically?

Yeah I would definitely say so, we just sat down and wanted to get a product that didn’t compromise or cater to what was out there, you know, we wanted it to be unfiltered, on top of that I had just moved to the UK, so it had to be that introduction to everybody over here, I wanted to let people know who I was you know?

What does success mean to you?

As long as success equals happiness, thats what it means to me

What advice would you give to aspiring Musicians?

Hone your skills, hone your craft, know the landscape and don’t fucking compromise!

The African Dream EP is out now and on iTunes https://itunes.apple.com/gb/album/the-african-dream-ep/id807501183

Be the first to comment on "Negash Ali – African Dream E.P (Interview)"