Many of you may know Fumez the Engineer through his audio tag that has been blowing up in the UK rap scene for the last few years and for his work with online platform Linkup TV, we sat down with the young upcoming engineer to talk about how he started working with Link Up TV, his latest project ‘The Mix-tape’ and his thoughts on the current UK music scene and the violence attached to it.

What got you into music & How long have you been engineering in the industry?

I got into music around the age of 15 through a youth club but I didn’t really take it seriously at the time only every now and then I would go to the studio, in total I’ve been engineering for about 5 – 6 years now.

In the few years, you took out how do you feel UK music changed?

It got a lot better,  the people I was working with before became well-known individuals in the music scene. The whole of the UK scene rose up, we started making movements again, we started doing fewer cover tracks and producing more of our own. The US rappers started to appreciate us more and recognise our music such as co-signing us and bridging the gap between UK and US music.

What do you consider to be the highlights of your journey so far?

For me, it was my mixtape and the response it got from my fans, we trended two days in a row, it was a great moment for myself and my career. It opened a lot of doors for me and still is to this day. Having my own personal touch on all the processes of the mixtape made this more special.

Explain your audio tag? We hear it everywhere whether it’s Link Up TV “Mic Check” or a track you’ve engineered, we’re expecting to hear ‘Fumez The Engineer’?

I created the audio tag when I first started engineering and it’s stuck with me ever since. Artists & producers have an audio tag but at the time engineers didn’t so I thought I would create something so my name will be out there. It was more for trying to establish myself my name in the industry so potential clients will know who engineered the track.

Tell us more about how the Link Up TV opportunity came up and your relationship with the Link Up team?

I first met Rashid back in the early days of Link up TV at a youth club I was engineering at with Ren and was always around their Behind bars segment but not officially working with the platform or fully doing Music full time and then after a conversation in Shepherds Bush Westfields with Rashid about getting back into music I spoke with Joey Clipstar and we linked up.

Now I handle all of the engineering working on projects such as their segment ‘Mic Check’ individual tracks such as Krepts ‘Last Night in Lagos’, Cadet’s ‘Stereotype’ and Bugzy Malones ‘Late Night in The 0161’.

You came on our radar earlier this year in March when you dropped your first solo Mixtape aptly name ‘The Mix-tape’, Describe your creative process behind both The project and the artist selection?

The reason why I called it ‘ The Mixtape” is a play on the word “mix”, I’m an engineer and I mix and there was also a mix of different artists on the  mixtape. In terms of the creative process, it was created in my studio, the videos were filmed in my studio and I had my own touch on the Mixtape. The thing I did differently was I changed my audio tag. I have two, one that everyone hears and there’s a second audio tag which was used in this mixtape.

The artist selection was a mix of personal taste and artist buzz, Tremz is a good friend of mine as is Beluga Ice and a few others and there are lots of artists that are doing their thing right now that needed to be on there.

There were a few artists that I wanted to feature but I couldn’t get. That for me is just the part of the industry and a learning process. Overall I’m happy with what I created and the artists that I got to worked with on the mixtape. 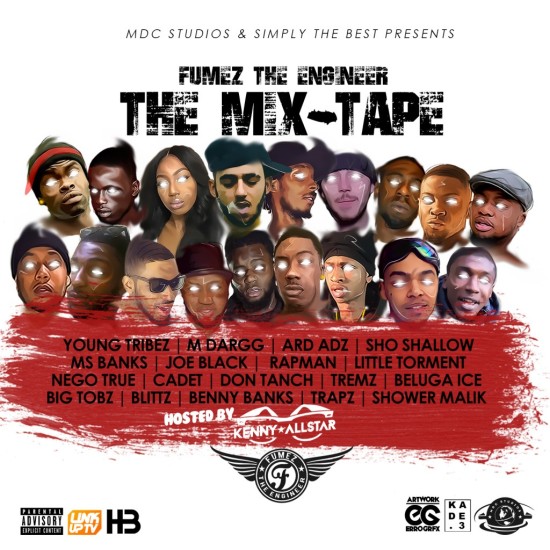 You just dropped a track with a visual ‘Round Here’ featuring Showkey, Abracadabra, Trapz, and Fonzie, was there any problems releasing the tune due to Showkeys unfortunate death earlier this month?

There weren’t problems, however, the family wanted to release a tribute to M Dot first and then gave their blessings for this release as long as recognition was paid to the memory of Showkey.

Related to Showkeys unfortunate death, how does it make you feel about the mix of road violence and Music that exists in today’s UK Rap and Drill music?

First of all I would like to say R.I.P Showkey, certain times you can’t get out of certain situations I’d prefer that Music and road should be mixed, I think that they should be separated, there a lot of people getting signed by Sony and other music labels as well as smaller imprints and brands such as Relentless, picking up talent showing that there are too many opportunities’s available for you to be mixing the two, look at what Stormzy just did with adidas, featuring Man United and Pogba for instance. If you’re talented, music should be your opportunity to leave road.

What obstacles have you encountered on your journey in the music game?

I’ve had a few encounters where people are not serious enough to work and are not on the same wavelength as me, but in every job and industry problems arise, it’s the way you deal with it and move on which is key. At the end of the day it’s all business.

Increasingly in the media and amongst music fans, there are blurred lines between UK rap and Grime Music often leading to the two being categorised as one Genre what are your views on this?

To me they are two different things, I don’t think they should be in the same pigeonhole. Grime is doing better in terms of shows than UK rap. I personally work with more of the UK rap now, it’s hard to draw me into grime but everyone is entitled to their own opinions on the matter.

What projects do you have planned for the rest of the year?

I’m working on four more visual projects this year including ‘2016 Madness’ ft Nolay, Ard Adz, Clue, Blitz and Abracadabra, ‘2017’: featuring ten upcoming artists, and then a project loosely titled Bashment vs Afro beats’. Going into next year:  I’m going to start work on ‘The Mixtape Part Two’ open a new studio in January and I’ve got a new show coming that will be exclusive to Link up TV with the possibility of it being aired on Channel AKA.

Izzie Gibbs Links up with Donae’o for ‘Chillin’

Be the first to comment on "Fumez The Engineer: Exclusive Interview:"