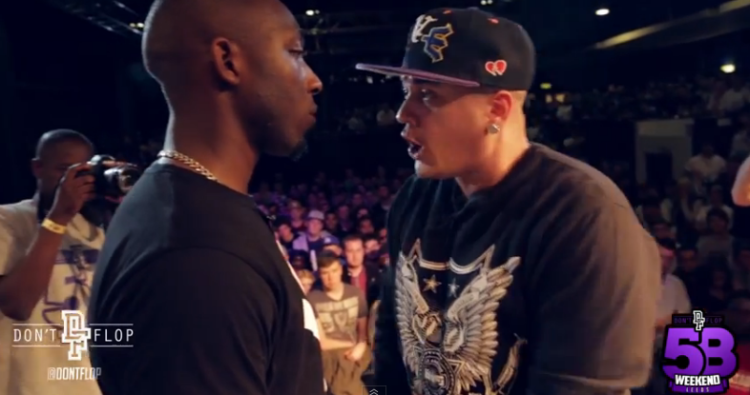 UK Rap has it roots in the underground scene of battle rapping, just like its U.S Hiphop cousin, with all the commercialisation of UK Rap we wanted to give one of the UK’s largest Battle rap platforms a mention.

“Don’t Flop Entertainment” is the largest Rap battle league based in the U.K. It was founded by rappers Rowan Faife and Cruger in 2008. Since then, notable performers have included; Rizzle, Blizzard, Mercury, Music Prize nominee Soweto Kinch and Mark Grist. “Don’t Flop” events feature all elements of Rap culture, including freestyle battles, DJ sets and live performances by Rap artists. The battles are closely watched by the platforms  growing on-line You Tube fanbase. Their most popular feature was the 2011, “Blizzard Vs Mark Grist”, ‘Student Vs Teacher’ Rap Battle, which was seen by more than 4 million fans worldwide. The dedicated “Don’t Flop” team is constantly touring the UK to find new talent.

The next Don’t Flop Rap Battle will be ‘Camden Carnage,’ which starts on Saturday the 14th June, at Fiddler’s Elbow Camden (12-5pm). This will also be the first time that fans of the platform will be able to grab themselves some Don’t Flop Clothing, such as Hoodies and Tees. For more information on Don’t Flop, the next event and to grab some clothing check them out online.

Potter Payper drops new video ‘When I Was Little’