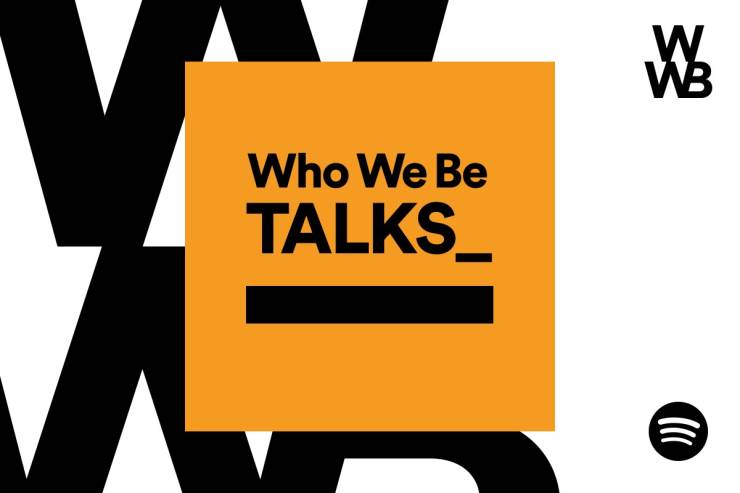 One of the biggest rappers in the UK, Aitch, joins podcast hosts, Who We Be TALKS_ hosts, on this week’s episode of Who We Be TALKS_. The full episode can be listened to here.

With Aitch’s latest release of ‘Learning Curve’, he responds to the controversy raised by the single’s cover, and the speculation around his highly anticipated first album release, plus the differences between London and Manchester and what he is still learning to work on.

Tune in to hear Aitch’s uncensored views as he reflects on his music career so far and the effects of social media on himself and society.

Who We Be TALKS_ delivers in-depth insight into the lives of artists, music, culture and everything listeners need to know about the beating heart of Black culture from the people who shape it. The show is recorded on a Monday and drops each Tuesday, making it as timely and reactive as possible. Who We Be TALKS_ is a Spotify Original Podcast within Spotify’s library of thousands of podcasts currently available on the world’s leading music streaming platform.

Aitch on his plans to get on some grime beats in the future:

Aitch: “I used to make grime music as much as people think I’m anti grime. I used to make it until I released ‘straight rhymes’, which was the first rap song that I ever made, so when it took off from there, I just thought I can’t really go back to grime, but I will now. It was just from being a young kid, and where my career was excelling from a rap song, I just had to stick to what I knew. But God knows, I think you get less commercial people liking your music when it’s grime, but then I have catered to both things, so I don’t know, it’s part of the process, I guess as people aren’t going to like all my music.  The album that hasn’t been made yet; I think it will really shock people hopefully.”

Aitch: “All the negative stuff was mad to see; obviously, rappers get hate all the time, but it was a lot, and it was also shit to see men hating on girls that much, it’s hard to witness. If you’re going to comment and say that this tune is shit, then that’s fine, say no more, you can do, but why are you going to comment about a girl. However, I also found out after I posted that picture how many men behind-the-scenes low-key like plus size girls, and how many were hiding from it.”

Aitch on what drive him to pick those models for the artwork shoot:

Aitch: “Because that’s my vibe, if you listen to a couple of my songs and previous lines, certain bars, I reference it, and I know other people do like fuller figures, I think it’s a thing where people don’t want to admit it, and I’ve seen a few things where girls have said, ‘Oh guys just want to do one night with us and never date us.’”

Aitch discusses the abuse he receives on social media:

Aitch discusses the differences between Manchester and London:

Aitch: “I’ve been messing around with KC for a while as he’s from Manchester. I’ve done a few videos with him on the song called 30 and safe to say. He’s just always brought my ideas to life, and no one could have done a better job than him.”

Aitch: “London is where it’s at business-wise, and that’s where everyone else is at but Manchester has got a little different, creative edge to it that London doesn’t have. I’m not saying it’s better but it’s just different. People definitely smile more in Manchester and a lot is going on in London, whereas in Manchester, it’s slower and calmer. I guess that’s because there are not as many people in it.”

Aitch: “You just get more boujee in London, that’s why people don’t rate me no more as I’ve been down here.”