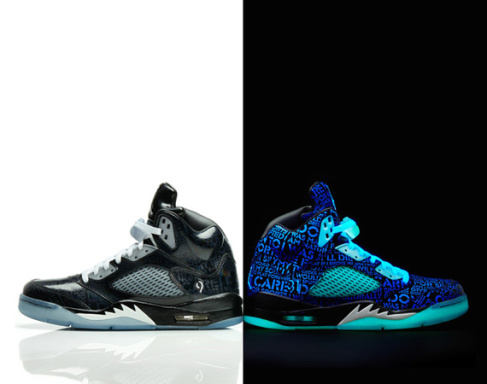 These Kicks are very different from the latest Jordan releases that have had the Sneaker world going crazy, they have a very real story attached to them. Isaac Arzate, a talented 12-year-old athlete passed away suddenly in April 2012 after being admitted to American childrens hospital OHSU Doernbecher in January of 2012 suffering from a heart attack. Isaac recovered from open heart surgery and was invited to be part of the hospitals Nike and Jordan sponsored 2012 Freestyle Program, where patients of the hospital get to design their very own pair of Kicks to raise money for the hospital. Issac initially started sketching and designing his Air Jordan V while recovering, but unfortunately passed away in April of that year from a second heart attack. In honour of Isaac’s life, Nike and OHSU invited Isaac’s family to complete what their son had started. Using his initial design sketches, the family came together to complete the design. The main feature of the kicks design is a poem printed in black light ink all over the upper which was written by Isaac on the day before his death which incorporates the words: “My team. My family. We are brothers forever. No matter what.” Instead of the Jordan 23 the number 31 is on the Kicks which represent Issac’s number he wore on his Basketball Jersey. Another feature is Isaacs initials on the inside of the tongue. These Jordan V’s drop on September 14th both online at Nike.com and at all Nike spots, all proceeds raised will be donated to the OHSU Doernbecher Program. This is a real chance for Sneaker collectors to give to a worthy cause whilst updating their collections. To find out more about the OSHU Doernbechner sponsored 2012 Freestyle Program click here.

The Air Max 95 gets the Silver Bullet Treatment

Did Off-White™ Use a Bob Ross Painting on a T-Shirt Without Credit?