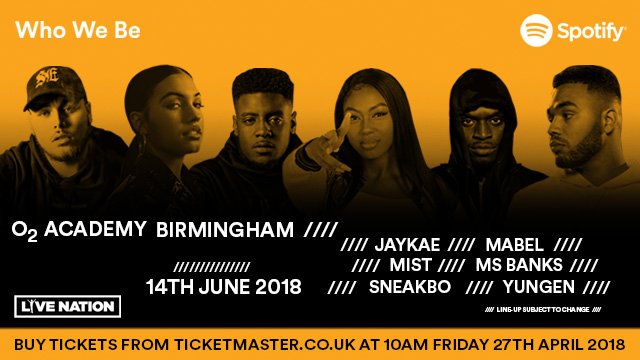 Spotify’s ‘Who We Be’ Live is back once again following the success of 2017’s sold out Ally Pally event. Spotify have once again upped the levels by bringing us not one, but two live shows : The O2 Academy Birmingham on 14th June, and Alexandra Palace in November 2018, presented by Live Nation Entertainment.

This year, for the first time, Spotify will be taking Who We Be to Birmingham, with an incredible line up including Jaykae, Mabel, MIST, Ms Banks, Sneakbo and Yungen.

Who We Be is curated by Spotify’s in-house urban music team, led by Senior Editor Austin Daboh, and is one of Spotify’s most listened-to playlists in the U.K., with over 250,000 followers.

Austin Daboh, Senior Editor at Spotify, said: “Spotify launched Who We Be Live in the UK last November and the response was phenomenal – from the artists, managers, labels, and most importantly, the fans. We knew we had to go even bigger for 2018, and we have! We are so excited to be taking this event to Birmingham, where there is a such a vibrant music scene, as well as bringing it back home to Ally Pally in November.”

Sam Bush, President of U.K. Touring at Live Nation, said: “We are excited to be working in partnership with Spotify on Who We Be Live. This is an event curated for the fans and we have some of the most promising and relevant artists performing in both Birmingham and London later in the year.”

The full line-up for the Alexandra Palace leg will be announced soon.

Following the same as last year, lucky fans of the artists performing followers of the Who We Be playlist & O2 customers will start receiving emails from Spotify around 10am on Wednesday 25th April, giving them the opportunity to purchase pre-sale tickets before anyone else!

Live Nation pre-sale tickets will be available at 10am GMT on Thursday 26th April & General tickets will be on sale at 10am on Friday 27th April. Priced : £22.50 (Plus Booking Fees) from www.ticketmaster.co.uk