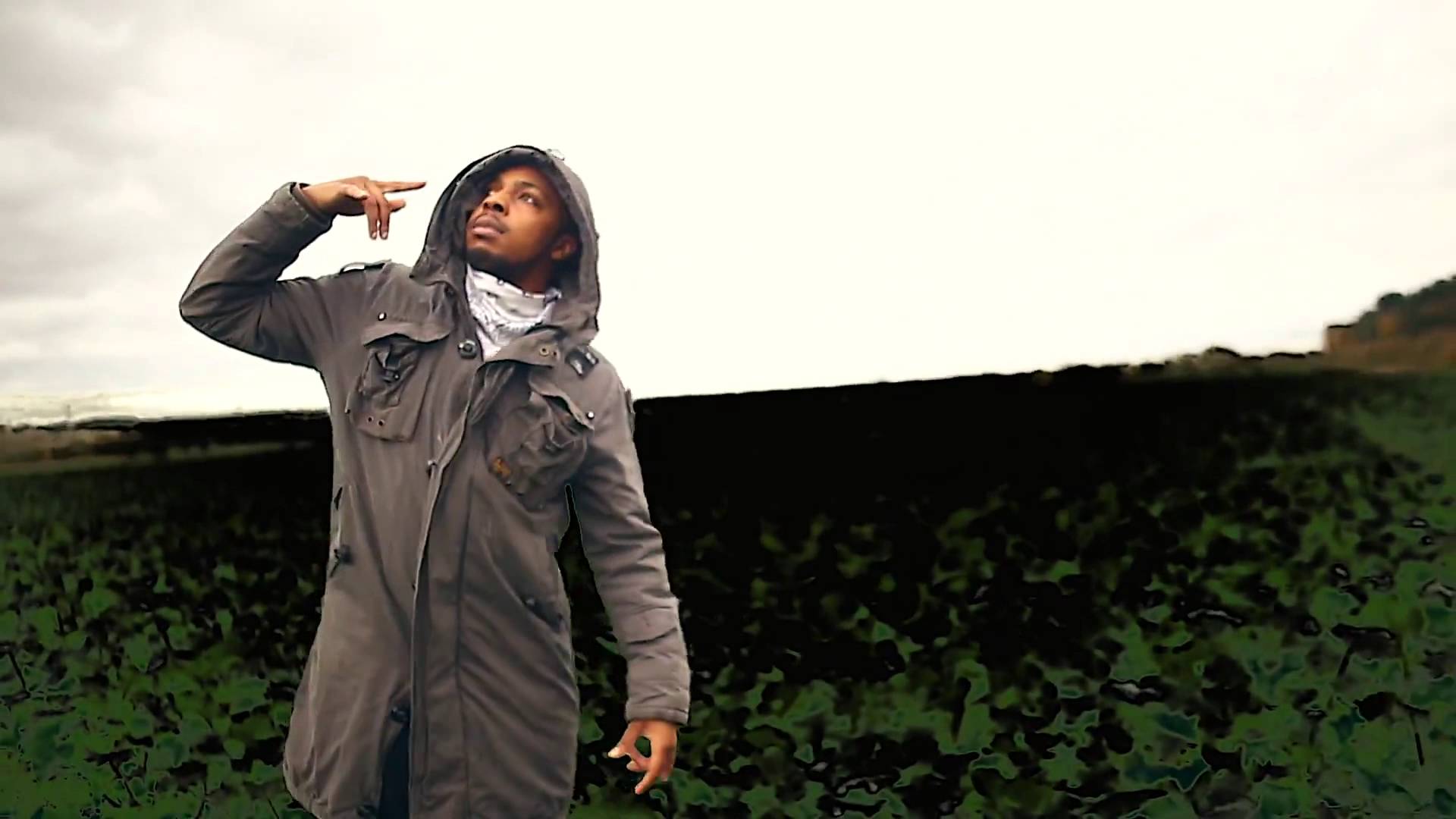 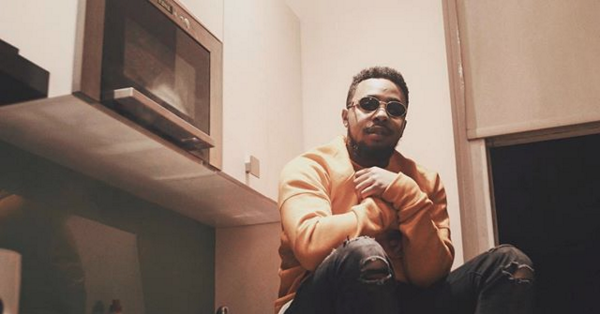 Fee Gonzales is a South London rapper who has been causing shockwaves in the game for a few years now. Coming off dropping his latest 17 track mixtape, ‘2L82H8’ Fee has set the pace for 2018 once again. Expect banger after banger.

We sat down with Fee and discussed life growing up, his musical influences, mixtape’s, the UK music scene and his passa with Mic Righteous.

Where did the name Fee Gonzales come from?

It’s actually my nickname. My mum’s always called me ‘Fee’ as a kid so I just run with Fee Gonzales.

I grew up all over South London, life growing up was normal, I did the usual, went to school, chilled with my mates, and everything else, you know what its like. When you’re in it, everything is normal because you don’t know anything else.

When did you first start rapping?

From a young age I was rapping as you do, but it wasn’t really serious or going anywhere. Really and truly over the last few years, I’ve begun to take it seriously and realise the music is going somewhere

Who influenced your music?

The usuals, Biggie and 2Pac but a lot of my influences were heavily from the Jazz scene. I was brought up on a lot of different genres of music so I have a varied taste.

When you’re in the studio do you experiment with beats and see how it goes or is it a regimented way?

A bit of both to be honest. I run with the vibes in the studio. Simple as that, I’ll hear the beat, write some lyrics and run with it. I also go down the regimented route sometimes, it really depends on the song and the space I’m in at the time.

How do you deal with the pressure of dropping banger after banger? Fans expect you to keep the levels raised

I kind of stopped caring what everyone thinks, not in a rude way, more of a ‘I can’t please everyone’ way so I’m just going to do me. I don’t feel the pressure of it because I’m comfortable in my own lane and I know the quality of the music I’m producing.

Does Mixing with artists that are selling numbers and have huge followings act as an incentive for you to go harder or do you sometimes have to remind yourself to stay grounded?

Not really, only with putting out music. As an artist, I feel I’m the best. The only part I’m really in competition with other artists is the marketing of my music and the plays. As an artist, you want to be the most relevant person out there ahead of the others.

Your mixtape ‘2L82H8’ is now out. Tell us more about the creative processes?

To be real I can’t really remember the creative side of the tape but I know it was hella lit. In terms of the creation of the tape I made the whole thing in 3 days, my aim was to bang this out as quick and organically as possible & I ended up creating 10 tracks in one studio session. 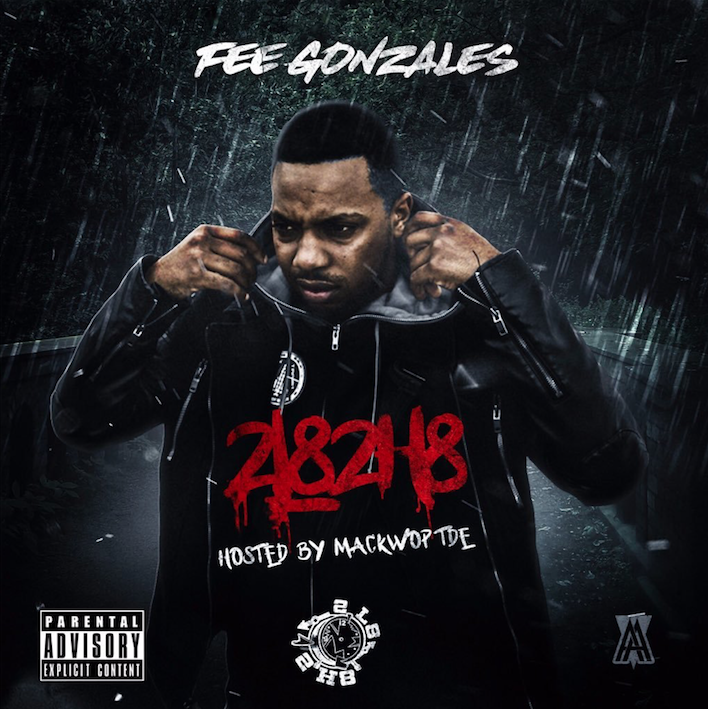 You’re an old-school SMS affiliate? Could you tell us more

Tell us about the passa between yourself and mic righteous calling you trash on twitter?

I posted a video on twitter of my Radar freestyle and it went viral. Mic Righteous went out of his way to respond to the caption of the tweet which said “The UK Lil Wayne” with “First of all.. Lil Wayne isn’t trash” I wasn’t going to respond to him because it was irrelevant but couple rappers got involved to back it, but yeah, is what it is. 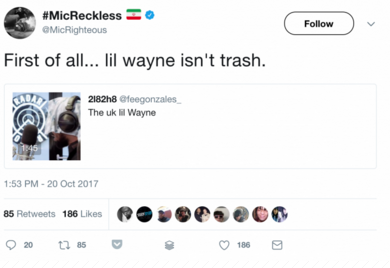 And then you dropped a diss track?

The track is for the sport. It’s nothing but healthy competition amongst ourselves. Music is our game so we are going to play by the rules. End of the day, he’s a legitimate person so I’m going to respect the man.

Thoughts on the UK music scene?

Could we see UK rappers entering the battle rap field as they do in the US?

You’ve got ‘Don’t Flop’ rap battle which is big in the UK, I think it’s bigger than UK rap. It’s been going on for a good few years now, we don’t need to focus on the UK x USA cross, we need to focus on investing time and energy into some of the street guys who are out there harboring a talent.

Who would you say the best rap artists are in the UK at the moment?

How did it feel performing at festivals?

Festivals are lit but I just want to get paid. It’s all about that Stormzy money!

How much do you get involved in the UK Music scene as a whole, party, and networking with other artists?

I do all of that stuff, I go to the low key Shoreditch esque events where it’s calm and collective. Not really about the hood events.

What’s next for Fee? Gonzales

Joint tape with myself and Fume. More music for the fans, maybe an album, just wait and see, 2018 is my year.