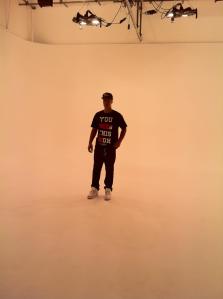 Trap-ped is all about discovering UK’s talent we bring Britains best kept secrets to our pages and make them easily accessible to the people that matter, you the reader.

Once again we have an exclusive interview from within the music industry, this time from the Grime genre. We caught up with a huge talent from the party town of Ipswich who goes by the name of Nee-Hi.

Dubbed “The Fresh Prince of Ipswich” for his energetic performances and old-school style, Nee-Hi is noted for his eclectic flair, producing and spitting on music ranging from Hip-Hop and Grime to Electro, fearlessly allowing genres to mingle, creating astonishing unique tracks.

Nee-Hi began his creative journey at the age of 11, and by the age of 15 began focusing on fully forming a career, linking up with a Grime crew called ‘Ear 2 da Street’ (Ipswich based) and working with mainstream recording artists and producers such as; Roll Deep, Danny C (Aim records) P money (OG’s) and Sketchman (The final Draft).

Nee-Hi completed the recording of his new L.P ‘Houston we have an L.P’ at Aim Studios with Danny C, which was released December 11, 2012. The L.P featured collaborations with  both P-Money and Sketchman, and included a video for the track ‘Nice knowing you’.

Nee Hi is currently putting the finishing touches to his Album ‘Square one’ which includes a collaboration with 2012 X-factor contestant Lucy Spraggan and also has a video for the track ‘Jet Plane’ that has been used for feature film ‘The Man Inside’ starring Grime star/actor Bashy. The album is scheduled for release on April 22 for free download (with the option to pay) from www.nee-hibandcamp.com and will be self promoted, with videos and singles dropping every other week in the run up to the release date.

We were lucky enough to sit down with Nee Hi despite his busy schedule of recording and producing and this is what he had to say:

Nee Hi it sounds like you have been mad focused and productive with your trade,where did your passion for music come from?

It really just comes from growing up in a boring place. People either played football, dabbled in illegal activity or rapped… and I never liked football.

Where did the name Nee Hi come from?

The name really has no meaning, in all truth I was trying to think of a name and my mum was like what about Nee-Hi and it just stuck, and out of respect to her I’ve never changed it. Plus my godfather Slick Rick said he like it. (yes the real Slick Rick)

Who are your role models/inspiration?

I don’t really have role models, I’m just really wanting to be the best at being myself. I’m inspired by a lot of people and situations though. Way to many to mention but my real inspiration to do what I do comes from my godfather Rick, my family, friends and daughter.

You have worked with some of the great names from the Grime Industry tell us how those collabs came about, especially the collab with P Money.

I’ve worked and linked up with a few people I really looked up to as a kid. I met Dexplicit a while back at his studio and was trying to play it cool but all I could think was ‘I played pow 24/7 when that came out and this is the guy that produced it’ That was dope. As for P Money we both recorded in Aim with Danny C and I reached out to him and we worked something out and it just popped off.

You have a banger on your upcoming album called ‘Jungl.is.M’ what is it about?

Jungl.Is.M is an art. It’s an art to survive in this Jungle everyday. I know people my age and younger that have lost there way, some had mental break downs, some have passed away, some at there own hands. It’s crazy, so when I heard that beat I thought I could work the classic sample into it somehow and make it something for the people to nod there head too but also learn. It just talks about a very small amount of things I’ve seen while on my journey through this jungle.

How hard is it to self promote a whole album including videos and have any deals been put on the table for you yet?

It’s hard, I’d be lying if I said it wasn’t (and I never lie), but I’ve got a supportive fan base and friends that help me get things out but we’re always looking for more people to join the promo team, bloggers, promoters, or just music lovers with a facebook profile, they can all play a part. As for deals I’ve just inked a deal with Def Jam but I can’t go into details just yet.

Name us your top three Grime Artists in the UK at the Moment?

Cas is dead, P Money and JME, in no order. But it will probably change tomorrow, but today there the ones I’m playing.

What other projects are you currently working on and what does 2013 have in store for you?

I’ve nearly finished recording another album which I produced the majority of, so that’s gonna be something different for people and also a group I’m part of called PCP have stupid amounts of unreleased material, as a crew and individual members also Porchy is gonna be releasing material soon and Jeromeo who is one of the dopest fat black rappers I’ve ever heard. He’s tryna lose weight but fuck that, nobody likes skinny rappers.

Nee-Hi walks on water. He is also said to be the next best thing out of the UK since Slick Rick, and Slick Rick said that, ask him.

Keep up with NeeHi, he has just released a banging album and is back in the studio.To contact Nee- Hi and to listen to his music go to: